What to expect now the US government is gone forever 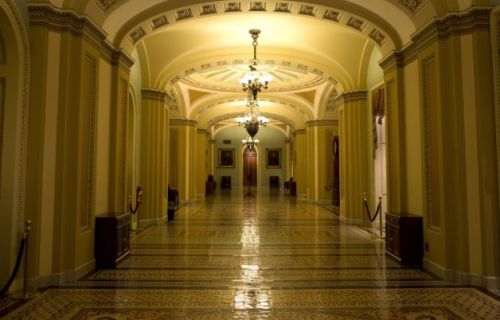 Babylon the great is fallen, is fallen, and is become the habitation of devils, and the hold of every foul spirit, and a cage of every unclean and hateful bird.

The United States Federal Government isn’t dead, exactly, but it’s not what it used to be; its old hebephrenic fury has finally given way to a nice restful catatonia. Anarchy in the streets! Feudalism in the sheets! It’s a pity that most people’s reactions have been so boring. The urge to go out and commit some crimes now that all temporal authority is suspended just shows how trapped we are in the discourse of legality – in the end, it’s just a gesture of compliance. We should know by now that the transgression is already built into the law, that the violation is the kernel of the prohibition. Now that there’s no code left, there can be no crime. The idea that you can go out and rob a few TVs while Uncle Sam flails for his feeding tube really just demonstrates a depressing lack of imagination. Here’s what will actually happen.

With no government funding to maintain the prison system, new spaces and strategies will need to be found to ensure that society’s most dangerous enemies are kept under careful supervision. The solution is obvious. Starting from tomorrow night, you’ll be able to see your favourite inmates from the ADX Florence Federal Penitentiary in Colorado as they’re humiliated live on The SupermaX Factor. Competitors – including the burlesque artist Umar Abdulmutallab, the ballroom-dancing heartthrob Richard Reid, and the shyly hopeful illusionist Ted Kaczynski – will face a panel of judges made unemployed by the dissolution of the Tenth Circuit Court of Appeals. Viewers at home can vote for their favourite by phone, text, or tweet. There is no prize for the winner. There is no winner. There is no hope. (Meanwhile, 3% of the total African-American population are being forced to take part in massive grinning pseudo-rallies for the ad breaks in which they march to demand more mobile internet coverage than any other provider or that same great taste but now with no calories.)

After the final dissolution of the ‘sovereign difference of abstraction,’ all representations of things are now that thing. In museums and galleries enormous pitched battles are breaking out between various 18th century armies. 2Pac has already been spotted, alive and angry (if a little stylised), in at least forty cities. Singers and poets who complain of a hole in their hearts are finding themselves immediately and fatally falling victim to an epidemic of mycocardial rupture. In the forecourts of churches across the Midwest Jesus screams in agony and confusion on the Cross as worshippers solemnly bow their heads. “Help me,” he begs. “Why won’t any of you help me?” Meanwhile, abstract concepts are being reified in a way that’s both massive and has a lot more tentacles than you’d expect. The suddenly immanent Ideal of Justice is expected to land over Topeka early next morning. There are likely to be few survivors.

The family unit, which has since ancient times been a microcosmic expression of governmental power, is similarly to be shut down. Working mothers are now merely Working, their individual subjectivities entirely dissolved in the pure stream of production. Violent crime among babies under six months is set to skyrocket. There are #nodads. At the same time, the resulting decomposition of the Oedipus myth has resulted in everyone being completely happy and well-adjusted to the extent that it’s actually starting to get kinda infuriating.