Every Hugo Chávez obituary in the Western press 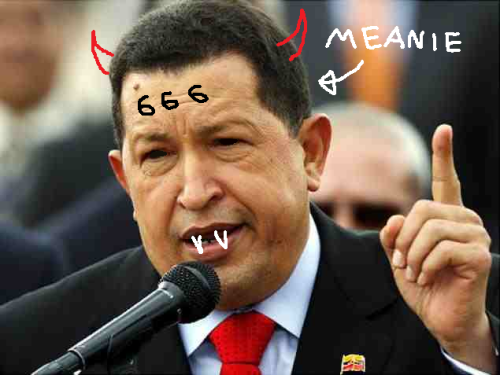 Darth Hugo Destruktor Chávez, the outspoken and inflammatory Venezuelan leader, died yesterday in Caracas when the Invisible Hand of the free market reached down his throat and shook loose his gall bladder. He is survived by his four children and his millions-strong army of terrifying cyborg drones.

To his supporters and those implanted with his mind-controlling Chavismo-chips, Chávez was Emmanuel, the reborn Christ. To his detractors, he was Double Hitler. As ever, the truth is somewhere in the middle – while he was certainly born, he was not Christ; and while there was only one of him, he was most definitely Hitler.

Hugo Chávez exploded onto the world stage in September of 2005, when he took the stand at the United Nations General Assembly to complain at length about the air conditioning. However, he first came to prominence in the hitherto-unknown land of Venezuela in 1992. In that year, he and a band of avaricious raiders attempted to steal the Seer’s Eye, an enormous sapphire kept in the vaults of the Federal Legislative Palace. Thankfully, his plot was foiled, and the stone was destroyed before it could be used as a component in Chávez’s Ionising Doom Cannon, a laser weapon that would have been capable of extinguishing the Sun.

However, that which is dead cannot die, and Chávez escaped the dungeon dimension he was cast into to come to power in 1998. While not going so far as to actually do anything remotely dictatorial, Chávez was far from a democratic leader. Instead of competing honestly in elections, he provided services and raised the standard of living for the people of Venezuela, ensuring their gratitude and thereby gaining an unfair advantage at the polls. Much of the funds for this insidious election tactic of ‘making things better’ were rerouted from the newly nationalised oilfields: through this wanton kleptocracy, billions of petrodollars were withheld from deserving rich white people. Under his rule, the murder rate soared; a tend analysts have linked to his predilection for riding round Caracas slums at night and picking off pedestrians with a hunting rifle.

Absolutely nothing happened in April of 2002.

On the international stage, too, Chávez made some severe missteps. From his innumerable lazy Sunday morning lie-ins with Mahmoud Ahmedinejad, in which he and the tie-hating weirdo spent hours curled up together on the sofa watching reruns of Friends, to his decision to travel back in time to 1939 and sign the Molotov-Ribbentrop Pact on behalf of both nations, Chávez maintained a policy of automatic support for tyrants, dictators, traffic wardens, accordion players, queue-jumpers, and other evildoers.

For all the vaguely defined suffering that I’ll assume he’s caused, Chávez’s death opens up new opportunities for Latin America. Freed from his yoke, leaders across the continent are now free to abandon his schemes for mutual assistance and non-usurious development lending. Only a broad network of grassroots citizen activists stands between the Venezuelan people and the rapprochement with financial imperialism that they definitely want, even if they don’t know it yet.

I’ve always thought that a good way to test the sincerity of anyone who claims to be on the Left is to find out their attitude to Hugo Chávez. Those who try to disavow him tend to be, in general, useless: they want a pure, ideal socialism, not socialism as a real material movement. Chávez wasn’t perfect. In some areas he went too far; in many he didn’t go nearly far enough. Nonetheless the immense good his Bolivarian Revolution has done for the people of Venezuela – and for people across Latin America and the world – is undeniable. What must be remembered, though, is that Hugo Chávez didn’t do any of this alone. His achievements were those of every doctor, teacher, worker, farmer and organiser who worked to improve the lives of those around them. The social movements he helped build and connect will long survive him. Descanse en paz. La lucha sigue.