To protect the world from devastation! To unite all peoples within our nation! To denounce the evils of truth and love! To extend our reach to the stars above!
Benjamin Netanyahu, address at the opening of the 2014 Knesset summer session 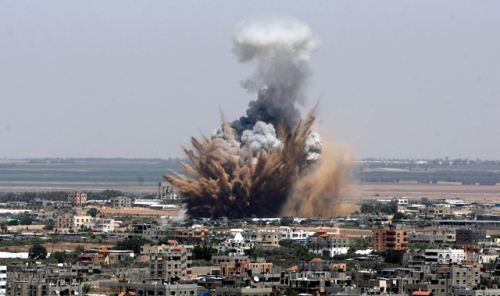 Imagine, if you dare, the sheer horror of living near an ideologically motivated amateur youth rocketry club. Something like the Socialist Youth Committee for Space Exploration, for instance, or the Young Tories Science Society. While at first it might be heartwarming to see teenagers developing an interest in politics and an involvement in practical physics, rather than indulging in their usual habits of playing violent video games all day or viciously cyberbullying each other to death, this would quickly grow tiring. The sudden bangs in the night, the scattered debris in the morning, the occasional terror as an errantly and implausibly airborne tin can goes screeching over your leafy suburb: it’s more than anyone could reasonably be expected to bear. Surely nobody would blame you if, after a few days of these potassium nitrate-powered hijinks, you and a few of your sensible middle-class neighbours got together to launch a combined military assault on the part of town where these kids hang out, killing them, their families, and several dozen others stupid enough to be in the area. It’s not that you’d get any particular pleasure from murdering all these people, but everybody deserves a decent night’s sleep.

This is the strange and inhuman scenario that the Jewish Anti-Defamation League invites us to consider. After one of the routine nightly Israeli massacres in the Gaza Strip, they posted a series of posters online, asking What if Hamas was in your neighbourhood? This question is accompanied by a map in which the Gaza Strip is superimposed on a major American city, appearing as an invasive white blob, cordoned off by a dotted line, radiating threatening circles and bristling with comically oversized missiles. Of the series my favourite is probably that showing New York: the contours of the Gaza Strip almost exactly match the line of the Hudson River, with the result that the genteel citizens of Brooklyn and Manhattan appear to be under mortal threat from rocket-powered proles in New Jersey and Staten Island. Most of these images implicitly raise the thorny question of exactly how Gaza came to be transplanted to the middle of Chicago or Houston; the New York poster neatly answers it. Gaza is already there; it always was. When the ADL talks about Israel defending itself, its audience are to imagine their own secret fantasy: having an excuse to fly over those awful poor neighbourhoods full of dreadful tacky people, and bombing them all to extinction.

Whenever the Israeli government feels the need to kill a few dozen Palestinians, everyone suddenly starts talking about rockets. The famously biased BBC, known to most Zionists as the international media wing of Islamic Jihad, led its coverage of a night in which 24 Gaza residents had been killed with the headline Israel under renewed Hamas attack. Meanwhile, ABC News in the United States showed images of Palestinians standing in front of the rubble that was once their homes and identified them as Israeli victims of rocket attacks. Even those nominally supportive of the Palestinian struggle are apparently compelled to add a bit of blather about how awful the rockets are. In the Guardian, a terrifying live-action Tintin figure calling itself Owen Jones felt the need to make – in an article about media distortion over the discrepancy between the two sides, no less – the caveat that there is no defence for Hamas firing rockets into civilian areas, and as sirens wail in Israel, the fear among ordinary Israelis should not be ignored or belittled.

Of course, the damage done by rockets to ordinary Israelis should never be understated. In Sderot, several people have tripped while running for bomb shelters, in some cases spraining their ankles; Tel Aviv’s summer morning lie-in was seriously disturbed by air-raid sirens as a flying tube of horse manure puttered its way to an empty field outside the city. It’s absolutely necessary for commentators of the prissy tepid left to utterly condemn any attempt by Palestinians to bring any object into aerial motion (be it a Qassam missile, a rock aimed at a heavily-armoured vehicle, or a fleck of spittle; in the West Bank and Gaza, the law of gravity is enforced by tanks and helicopters), because only by doing this can they hope to become the Palestinian Nelson Mandela – the secret ambition of all liberal quasi-Zionists. These people want to support liberation struggle, but first the oppressed have to stop firing rockets and learn instead to embrace non-violence; they need to bring their political programme down to the level of the inspirational quote set against a stock photo of a sunset. Still it’s not exactly clear what form this non-violent protest should take. During the First Intifada Israel was still heavily reliant on Palestinian labour and industrial action seriously threatened its smooth functioning; the arrival of immigrants from Africa and southeast Asia has solved that problem, and helpfully given the Israeli ruling class a new set of people to despise and brutalise. Weekly checkpoint protests in the West Bank are admirably peaceful, but have only really succeeded in boosting profits for the manufacturers of tear gas. All that’s left are rockets.

The rockets being fired from Gaza are a form of non-violent protest, and one that works. As military weapons they’re utterly useless. A 2012 analysis revealed that the 12,000 missiles fired over twelve years resulted in twenty-two Jewish fatalities – a kill rate of 0.175%. This is because they’re not really weapons. There are plenty of ways for resistance groups to inflict mass civilian casualties; the fact that they’re firing rockets instead shows that this isn’t on the agenda. It’s not a military campaign; it’s a highly visible protest against those forces that would prefer to turn Gaza into something like its representation in the ADL posters: a blank, white, empty expanse. The rockets are a reminder of the continued existence and the continued will to resist of the Palestinian people; insisting on this will without killing is a highly effective non-violent strategy. Given the dearth of any actual casualties in the rocket campaign, reports often focus on the psychological trauma suffered by Israelis living close to Gaza (and sometimes even their pets). This is taken as proof of Palestinian brutality, but when commentators decry the fear that the Qassams inspire, the implication is that they’d prefer a resistance strategy that had no effect whatsoever on the occupiers; in other words, one that could be safely ignored and might as well not exist. This point was most powerfully put by a spokesperson from the Popular Front for the Liberation of Palestine: The rockets are both a practical and a symbolic representation of our resistance to the occupier. They are a constant reminder that the occupier is in fact an occupier, and that no matter how they may engage in sieges, massacres, fence us in, deny us the basic human needs of life, we will continue to resist and we will continue to hold fast to our fundamental rights, and we will not allow them to be destroyed. So long as one rocket is launched at the occupier, our people, our resistance and our cause is alive. This is why they targeted the rockets – the rockets do make the occupier insecure, because every one is a symbol and a physical act of our rejection to their occupation.