Against the Evening Standard 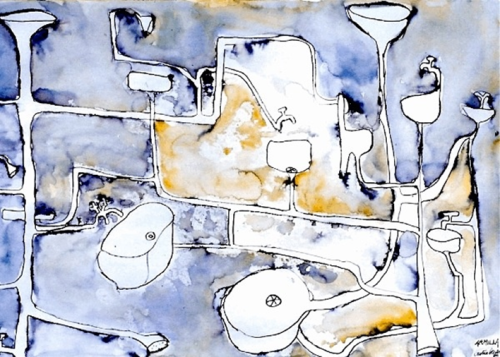 The collective noun for issues of the Evening Standard is a plague. These things should be dead, pulped and bleached to nothing, but watch how they move. Like any parasite, it never crawls around under its own power. The Evening Standard, folded in half to form a coward’s carapace, skitters about in the wind on its pointed pages, tapping in darts and pounces along the Tube-station kerbside between fag-ends and plastic bags. After it rains the water glugs upwards through an overflowing sewer, and the Evening Standard sprawled lazy over the grate rises and falls, seepages of grime-stained rainwater passing over the warping lines of text and sinking back down again; it’s found its power, it’s breathing. On the escalators the Evening Standard waits, great snowdrifts of the Evening Standard piling against the rails, to moulder and soften until it’s ripe. The Standard swarms on the carriages, waiting just behind your neck; the distracted millions pick it up and leave it somewhere else, spread its spores across the city, bring it into their homes. Assume that half of the Standard‘s daily circulation of 850,000 is zooming around on the Tube at any given time: all together, the newspaper is moving at nearly nine million miles per hour; over the course of a working day, plus an hour’s commute each way, the Evening Standard plunges the distance from London to its faint anaemic sun. Imagine if the city were stripped, like Calvino’s Armilla, of everything – roads, trees, bollards, buildings, people – but undergrowth, earwigs, and the Evening Standard. You don’t need to imagine; you’re already there. You’re wandering through the second city, its towers built from fraying newsprint. London is not a place to live; it’s a vast, decaying, mobile archive; a hole ceaselessly filling itself with the Evening Standard.

Reading the Standard always gives me a feeling of slow, creeping fury, boiling just below my skin, the sense that I might suddenly break out in gleaming pustules of bile right there on the Tube, that some parasite worming through the paper could claw its way into my eyeballs on its tiny hooks, fester, and breed: then vomiting, suppuration, horror, the screaming commuters banging their fists bloody on the windows as they try to escape, the train howling to a stop in the middle of the tunnel, the armed police in hazmat suits quarantining the area, lights sweeping through the shivering and the dying, the paper in my hands suddenly gone. Not on the first reading, of course: the Standard is awful in the same way London itself is awful, its vastness slowly bending in on itself until it becomes a cage, the steady tick of days and weeks and years, thudding past like the slats on a train journey: here you are, still in London, older, sadder, lonelier, and here’s another edition of the Evening Standard to carry you home to ready meals, Netflix, and sleep.

It’s monstrous in a way entirely different from the Daily Mail, for instance, which announces its monstrousness right there in screaming letters on the front page, or the neo-Nazi Spectator, making the reasonable case for racism in hectoring and patient tones. As long as there are Tories there will be Tory papers; complaining that the right-wing exists is entirely valid but not particularly useful. I’m not even talking about its most publicised outrages, although there are many. During the London mayoral election, for instance, there was its despicably Islamophobic campaign against Sadiq Khan, screaming in panic about his phantasmal terrorist connections, until he won the largest electoral mandate of any politician in British history, and the paper suddenly rolled over with drooping ears, fawning over wonderful lovely Sadiq and his brilliant plans for brilliant London. (Khan, of course, is the liberal ideal of the assimilated Muslim, a chummy tieless true-blue Labour Brit; if it can happen to him, then is anyone safe?) There’s its recent appointment of George Osborne, a Vaselined marionette whose only previous journalistic experience was as a freelancer for the Peterborough diary column at the Daily Telegraph, as editor. There was that gurning fluff piece on the alt-right, full of grateful remarks on how dapper they all look with their sweater-vests and their pale and perfectly cubical heads, complete with instructions on how to get the ‘fashie’ haircut for yourself. There’s its tireless advocacy for that fucking Garden Bridge. All this is awful and unexceptional. This is the media we’re talking about; why would you expect anything other than racism, idiocy, and a nice tongue-bath for established power?

What makes the Standard so uniquely infuriating is this. Several years ago, a group of skaters were campaigning to halt the vandalism-by-redevelopment of the magnificent South Bank Centre, and along the way prevent the bulldozing of its undercroft, a much-loved graffiti and skateboarding space. It should have been hard to oppose them on this: the skate park gave joy to thousands, destroying it would have given money to a few. Not for the Evening Standard. In a short note appended to an editorial column, the paper congratulated the skaters of the successes of their campaign. ‘In this stand-off between culture and counter-culture, the skaters have pulled off some deft moves,’ it wrote. And then, without warning: ‘But it is now time for them to see reason.’ What reason? What are they talking about? What could this possibly mean? The world is full of people making the case for what is stupid and wrong, but the Evening Standard never even makes its case. Here is something stupid and wrong, please agree with it at once. After all, this is what’s reasonable. That sentence contains in its ten short words everything that’s broken in life. The thoughtless appeal to a common sense that never existed. The endless construction of the reasonable conservative subject, spat out in their millions, naked and glistening onto the tarmac as the traffic arrives, reading the Evening Standard. If the world were a rational place, if people really were ever capable of seeing reason, that would have been it: eight hundred and fifty thousand trudging commuters would have thrown up their hands – god, fuck this – and immediately assembled to burn down the offices of the Evening Standard and start building a society in which nothing so blindly meaningless could ever happen again.

They may as well put it up on the masthead, in little manicured letters by the picture of Eros: Sed nunc tempus est ratio videre. To see reason; to do what is already being done, and not complain about it. In most newspapers the reactionary spite is calculated, mendacious, and vicious; in the Standard what dominates is a total witlessness. It’s all seemingly by accident, none of these people understand what they’re saying, they don’t know why they think the way they do, they don’t even really think. Take a journey with me, walk through the pages of the Evening Standard, see its gardens of fury. Half of the paper appears to have been written in crayon. In an article on infrastructure maintenance, the opening paragraph – this is entirely real – informs us that ‘Tower Bridge has to close for three months because the road surface is falling apart, the man in charge of it said today.’ Innumeracy is everywhere in its massive property section, which cheerfully exhorts you to move into a £3.6m new-build penthouse with a balcony swimming pool and 24-hour concierge. The lifestyle pages read like promotional copy – ooh, we all love a nice cupcake, don’t we. The opinion pages regularly host the observations of an extremely long-winded four-year-old child. One column sagely informs the reader that while it feels bad to get stuck in the rain, it also helps the crops grow, and that’s good. Another, from September of last year, took a full page to let us know that it’s autumn now. Various drabs of opinion impress on you the fact that London is good and great and the most wonderful city in the world; in others the writers simply summarise a book they just read, or say that there’s been a lot of good stuff of the telly lately.

When they turn to politics it’s similarly stupid. In November, the Standard told its London-based readership that the only person they could in good conscience vote for was Hillary Clinton. After the Copeland by-election, we were told that ‘the distinguished Cambridge historian Robert Tombs has called the European Union a system of “managed discontents.” Something similar could be said about Corbyn’s Labour, except that its discontents are scarcely managed at all’ – a fantastically terrible piece of writing, introducing a comparison only to immediately proclaim its uselessness in the very next sentence. With dispiriting frequency, Evening Standard writers like to dream up dialogues within Cabinet meetings – politics, as imagined by an idiot! – always giving the strange sense that you’re watching the world’s least popular child playing with her action figures. Finally, the star columnists. Here comes Matthew D’Ancona, plodding about like a lost child in orthopaedic shoes, with his glum little question mark of a face significantly too small for his head, and his mildly interesting name in lieu of anything interesting to say. Here comes Simon Jenkins, whingeing that he went for a walk in the park and some children who were probably immigrants splashed mud on his new linen trousers. Here’s the Tory line, repeated not out of any ideological impetus but as pure common sense: here it is, it’s time to see reason. Here they all are, shuffling, brainless, petulant, and wrong, the Kharons of London’s new modern hell, come to ferry you home.

You’re worried that having George Osborne as editor might compromise the paper’s editorial independence. What editorial independence? The Standard is a jellyfish, a parasitic worm, a creature with a hole at each end and nothing inbetween: it thinks nothing, it feels nothing, it floats through the infinite dark and waits for a tide to carry it along. Hence the fury. If someone believes something and you don’t concur, you can disagree with them. If someone has bad opinions, you can correct them. But there are no real opinions in the Standard, just the trace of drifting plankton, just idiocy and repetition. Sadiq Khan was a terrorist, now he’s the cuddliest mayor in the whole wide world; the tides changed, and this twitching thing drifted in another direction. It was autumn once, but now it’s spring. The Evening Standard is London’s paper; it’s the paper that London deserves: a proud and ancient city that’s now nothing more than a brief staging-post for international capital, whose lifeblood and materiality is nothing more than the wordless, unconscious, insatiable self-expansion of capital. Always parasitic, powerless without its structures of domination, achieving nothing by itself except the immiseration of others; always solipsistic, always feared, always terrified. If capitalism could speak, it would speak with a child’s voice. If capitalism could speak, it would speak like the Evening Standard.