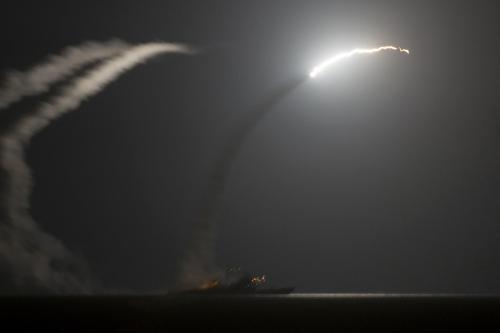 Donald Trump ordered his attack on Syria because of something he saw on TV. The world is full of people like him: old, shabby, pompous; people who know everything because they learned it all from somewhere, people who function as exit nodes for the vast extraorganic network of information that chatters across oceans and ping-pongs through outer space, people who form the anuses of the system of images, excreting their content back into the world of things, people who repeat everything they see on TV. Every suburban bus stop shelters a Donald Trump, some smugly witless man of the world who knows what he knows and knows it better than you, some tyrant-in-waiting ready at any moment to vomit up the whole of the received wisdom in one splattering stream, and then act like they’re in possession of some special knowledge because they’re able to do so. The only difference is that when Donald Trump blathers from the TV, the TV takes notice: he repeats what it says, it repeats what he says. Donald Trump is the network whorling in on itself; the system of careful mediation finally splayed out in the mud, legs out, back twisted, licking its own arsehole.

The media was kind to Trump’s attack on Syria. Every pompous outlet that has spent the last five months screaming incessantly about the threat to democracy, the inevitable deaths and the terror of wars, had nothing but applause as soon as the wars and the deaths actually got going. A fleshy and dangerous idiot, a vulgarian, an imbecile – until those first perfect screaming shots of Tomahawk missiles being fired were broadcast – that’s our guy, you show them Donny! This is when, as Fareed Zakaria put it on CNN, Trump ‘became the president.’ And he really is presidential now, because the president is a totemic war-chief, the bloated repository of every male fantasy that had to be repressed, someone whose only job is to look like they could kill a hundred people in the morning and pose for a photoshoot with their dogs in the afternoon. Never mind the deaths or the uncertain repercussions; Trump’s strike was utterly squalid and utterly ignoble, some fattened toddler idly shitting out molten steel into the parched graveyard that used to be Syria, saving nobody, helping nobody, thoughtless and obscene. Kill a few of their guys, teach them a lesson, it’s common sense. And all the sophisticates and strategists applaud – stricken by half-hearted guilt, of course; after all, you still wouldn’t want to have the man round for dinner. They write their long justificatory exegeses on the timeliness of the act, bringing out every little rhetorical trick of the educated ruling classes, because all their moral angst is also from comic books, and cinema, and TV.

On NBC, Brian Williamss, ranting himself into ecstasy, quoted Leonard Cohen: I am guided by the beauty of our weapons. What weapons guide? Cohen wasn’t singing about clubs or spears or missiles, but ideology, culture, and fame. Mediation. Whether he knew it or not, what Brian Williams was saying had nothing to do with the spotlit plumes of white smoke rising from the US Navy vessels in the Mediterranean. The beautiful weapon was himself. the beautiful weapon was TV.

Beyond the fiddly cloisters of the media intellectuals, why do Americans love their wars so much? Because war is the only workable substitute for being able to turn off the TV. Wars happen for the same grim and venal reasons that have always made the rich massacre the poor, but every other weapon is now subordinated to the screens, the nightly news and the outrage on Twitter. The media transmits the relentless horror of the world, sliced up into edible segments: here’s a problem, here’s a tragedy, here’s an atrocity, here’s something else. Chemical weapons, starvation, murder, war. All of it is shrink-wrapped and isolated; you can never really find out why this is happening, no more than you could really learn the long sad stories behind every neatly packaged item on the supermarket shelves. They don’t even need to lie, although they do that too; the propaganda is in the medium itself. And the ethical response to all this diffuse suffering, charging at your face out of nowhere, is no longer why is this happening? but we have to make it stop. Anything is permissible if it’ll just make this go away. There’s no better example than the 2000 film Rules of Engagement: our heroic Marines are called in to defend the US Embassy in Yemen from an angry crowd outside, and all the time they’re there we can constantly hear their endless and repetitive chants, and the camera flashes between shots to glimpses of furious mouths with terrible third-world teeth, furious, inhuman, a slow torture, until the good patriotic viewer is begging our heroes to just shut them up. After the Marines fire into the crowd, there’s a moment of perfect silence. Bliss.

The attack on Syria will not make its war go away. Every primly disgusted apologia for the attack is a travesty. So Assad should be able to use chemical weapons with impunity? So we should do nothing? See how that we slips in there, almost unnoticed. Is this the same we that killed 56 Syrian civilians in Manbij last year, and then 46 in rural Aleppo, and then nearly 300 innocent Iraqis in Mosul? The we that turned the Korean peninsula into rubble and carnage because the people there wanted a better life, and then Indochina, and then the Middle East; the one that’s currently engaged in starving millions in Yemen? What happened to Libya, after we were told we had a responsibility to save the civilians there too? This isn’t ‘whataboutery,’ but a simple question: when judgement and punishment are carried out by the same people, who gets to judge? If the Syrian government carried out the chemical weapons attack in Khan Sheikhoun then it is monstrous, cynical, and murderous – but the ability to punish monstrous states seems to belong only to the most powerful; in other words, the most monstrous, the most cynical, and the most violent. But all it needs is a we – a word reaching through the screen to swaddle you up in it – for the great roving predator of the world, dripping with blood from every pore, to become something else: the international community, the ones who must intervene, to protect the children.

The next attack won’t stop the war in Syria either, or the next one. That’s not what these things are for. The response from the Mail on Sunday’s Dan Hodges was instructive. Bomb Assad, he said, and then bomb Isis. And when that leaves what was once a functioning society in the hands of Jabhat al-Nusra and Ahrar al-Sham? ‘Then we go and get them too.’ After all, if every Syrian is dead, then the war is finally over. Their suffering is immense, but it’s not their suffering that matters: it’s the suffering of the viewer, at home, heartbroken as they watch the carnage playing out onscreen. It doesn’t matter who does it, and it doesn’t matter how it’s done, but we need to turn it off forever.