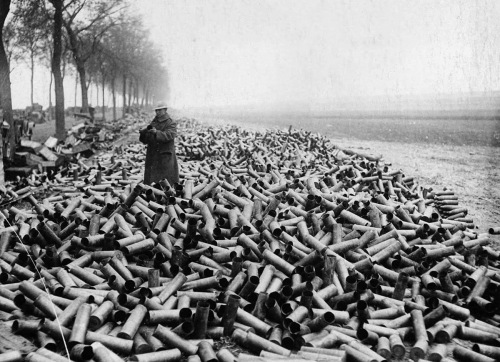 You don’t remember the dead of the First World War.

Nobody does, now, or almost nobody. At most, you might remember the ones who survived. There’s a photo, hidden away somewhere, of great-grandad in his old army uniform, and if you look at it you might notice with a kind of sickly horror that he looks a bit like you did at that age, that you’re now already so much older than this old, old man. Maybe there’s a box with some old medals, or even a decommissioned revolver. Pieces of someone who died much later, surrounded by TV and pop music, dreaming the blanketing dreams of the nuclear bomb. Someone who lived to see a different country, one that throbbed in full colour. The hole left in the world by those bullets and shells and clouds of poison gas one hundred years ago was not left in your world, or mine either. The people who had their heart ripped out by a stranger on the Somme are almost impossibly rare; we drag them out into our televised ceremonies now, so everyone can see what a fully incomplete human being looks like, so they can do our remembering for us. Trembling, a few last strands of thin hair limp against a crusting pate: I still miss my Arthur every day, every day it’s like he’s just been taken from me. That’s what it means to really remember: to be a seeping wound in a world that’s been bandaged up and gauzed into blankness. For the rest of us, there’s GCSE history, supermarket Christmas adverts, an immersive experience at the Imperial War Museum. For you, the dead of the Western Front or Gallipoli may as well be the dead of Sevastopol, or Agincourt, or Hastings, or all the nameless battles fought by our hooting ancestors, brachiating grimly through the canopies. We have nothing in common with the millions who went whistling into a barbed-wire void. If we did, we’d be a little more like the ones who came back out again, the ones the war turned into madmen or revolutionaries.

We don’t have memory. We have remembrance. Organised hypomnesis; a set of stony symbols. We remember that we ought not to have forgotten. The past is on the tip of your tongue, but it can’t be spoken; any word that could have contained it is an empty tomb. Non est hic. What remains are signifiers, gnawing at each other’s heads. A poppy is a symbol; it symbolises the Cenotaph. The two minutes silence has meaning, it means a wreath. The flag is a code for the national anthem. None of these things mean the mud and terror of the war, or the millions dead, because none of that is an object in our experience. There’s no shared referent other than the ritual of reference itself: the objects of remembrance stand, mutely, for themselves. Forgetfulness, made concrete, and misnamed.

This isn’t bad or wrong: it’s just space and time. We are where we are. Today marks the end of four years of official commemoration, an attempt to hang the shadow of the Great War over our own century, to turn time into a palimpsest. These have been four very strange years. On June 23rd, 2016, we voted to leave the European Union; one hundred years ago that day, a million Germans surged over the frontlines at Verdun and overran the fort at Thiaumont, only to be pushed back over days and weeks to where they had been. Endless, uncountable thousands dead. On June 8th, 2017, the Tories threw away their parliamentary majority in an act of blinkered authoritarian arrogance, a century after the British army accidentally shelled its own lines, killing three hundred colonial troops. In June this year, one hundred years after two dozen German divisions plunged deep into France in a last desperate effort to end the war, Germaine Greer asked why Beyoncé has to ‘have her tits hanging out.’ There’s no symmetry. Trump is not the October revolution. Weinstein is not the Armenian genocide. It doesn’t map. It’s no more present than the wars going on now, the thousands dying in Syria and Yemen and across the world. What can we do for the people of the Middle East, starved or disintegrated by British bombs or British military expertise? Build another monument for them, put it up on the fourth plinth, and forget them into symbols.

There are still ways to make the past breathe again. Mostly, by digitally altering and colourising old Pathé newsreel, and putting it in 3D. The effect is impressive: it looks so much more real. The war is no longer fought by spindly, jerky automatons, low-resolution flesh-robots. Computers have generated the missing material in the gaps within movement, to bring the footage up to 24 fps, which is the flicker rate of consensus reality. Now these soldiers look like actual human beings, which is to say that they look like all the other cinema-screen simulacra. Now the propaganda of the early twentieth century can be raised back up in the fullness of its authenticity, because now it looks more like how we lie in the twenty-first.

Again, this isn’t bad or wrong. There was a time in which we could remember, in which the war was something other than the mud-caked origin myth of modernity, but now is no longer that time. There are other ways of remembering. We can remember in the present: I remember when I came out of the land of Egypt and the house of slavery, and – historically speaking, at least – that didn’t even happen; I can remember it in solidarity with those on the boats setting out across the Mediterranean, or those sleeping on the ground as their caravan twists slowly up over the Mexican plateau. We can remember the war the same way. We’ll never know the trenches, but when those that lived returned home, the fight didn’t end; so many of them, across Europe and across the world, took up the struggle against the ruling classes who had sent them there to die, and we can fight for life and dignity too. For obvious reasons, this is not the kind of remembrance we usually get.

What we get instead is a strange kind of rage. This year, and every year, the poppy wars. (Not unlike those other flower wars, fought between the Aztecs and their ritual enemies: both sides agree on a time and place, and neither seems to expect to actually win.) Who owns the past, now that it’s wordless and as transferable as any other debt? Is this year’s the most politicised Remembrance Sunday yet? Might Eid be getting more Islamic? Can we stop the commercialisation of Black Friday?

The anger of the poppy-scorners is fairly legible. Never Again, we were promised, but it keeps on happening; maybe we can sit in silent quietist remembrance once the war is actually over. The anger of the other side is thornier. A violent hatred for those who won’t wear the poppy, sing the national anthem, support the Legion, the ones who insult the memory of the dead by insisting that the war that killed them was Actually Bad. In other words, those that try to remember something specific, instead of remembering the process of being unable to remember. It can only be parsed as an externalised guilt. No, it’s not wrong or bad to not remember the dead of the First World War, it’s only distance and time – but the rituals of the state command memory, and there’s nothing in the memory to grasp. You have failed, because you’re living now instead of dying then; you’ve failed because you couldn’t stop one hundred years washing over the world that was. Seething indignation against the people who refuse to remember, because you, too, have forgotten.

This post is, once again, dedicated to those ten thousand soldiers who were killed in the six hours between the signing of the Armistice and its taking effect, one hundred years ago, who gave their lives so that schoolchildren could learn that the war ended on the eleventh hour of the eleventh day of the eleventh month.