I went to Chernobyl

Chernobyl is not how you’d expect. By the time you go, you’ve done your research: you know that the nuclear power station there leaked a cloud of radioactive gas that swept over an entire continent. You know that Prypiat, a town of fifty thousand people, was evacuated and has been abandoned for twenty-five years. And the phrases you hear in connection with it – ghost town, nuclear wasteland, zone of alienation – conjure images of broad lifeless expanses of concrete and dead earth, of barren inhospitality, of a fractured landscape so unearthly it might be a sort of embassy of the moon. And as the coach takes you from Kiev into the contaminated zone, you are shown an absurdly lurid documentary about the disaster itself – although perhaps its Discovery-Channel sensationalism is perfectly appropriate for the absurdity of what happened there. A scientific experiment carried out by Soviet physicists at Chernobyl Reactor 4 that went horrifically wrong and almost threatened to wipe out half of Europe: it’s the stuff of pulp science fiction and disaster movies; that it actually happened seems somehow unreal. And you’ve learned about the heroism of the helicopter pilots who were rushed over from Afghanistan to drop sandbags onto the burning reactor and who all died from the radiation – not immediately, they didn’t suddenly slump lifeless over their controls, helicopters didn’t corkscrew out of the sky and smash into the ground with the cathartic finality of a Hollywood explosion; they died later, in a Moscow hospital, sickly-pale and emaciated, deep gouges cut into their flesh by the invisible subatomic enemy. 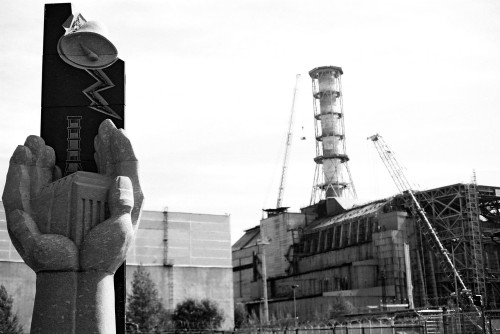 And then you see the reactor itself, its mangled mess of broken pipes and twisted vessels covered by an enormous concrete sarcophagus, a vast tombstone that forms a more sublime memorial for the victims of the tragedy than any of the slightly tacky plasticky monuments scattered around the area. It was built with no real consideration for architecture, the concrete blocks were assembled haphazardly, as quickly and as efficiently as possible, to contain the leaking radiation, but it does in fact look exactly like a cathedral. The faded smokestack forms the spire, it has its long nave, its square pillars like flying buttresses, its transept of scaffolding. It is the cathedral of the Enlightenment, a temple built to mollify the eschatonic power of the atom. Like the kaaba, or the kadosh hakadoshim, it contains a light so fierce that it would burn away any man who entered; and those who visit must undergo ritual cleansing – except here, instead of being anointed with oil, you press your hands against one of the large Geiger counters that ring the site and pray that the little light turns green.

But when you come to Prypiat, the ghost town, it’s almost impossible to draw a line of causality between the horrors of the disaster, the starkness of the power plants, and the organic lushness of what you see before you. Prypiat isn’t a barren wasteland, it is full of life. The forest has swallowed it up – and rather than being grim or menacing, it has an air of complete serenity. It’s impossible to find any sense of urbanity here: the central square is like a brief clearing in which some spindly plants still grow; what were once broad avenues now seem like country lanes. It’s as if the town had not been built and then abandoned, but had grown by itself in the middle of the forest without any human involvement at all: as if the buried strata of rock and iron, jealous of the autotelic vivacity of the plants above, had decided to organise themselves into roads and buildings, bursting out through the soil, twisting into new shapes to form a pre-ruined city. Its edges are frayed not because it has been dilapidated, but because the natural world rarely works in straight lines; even when inside the buildings, the layer of broken glass that crunches underfoot seems as innocuous as the litter of a forest floor. 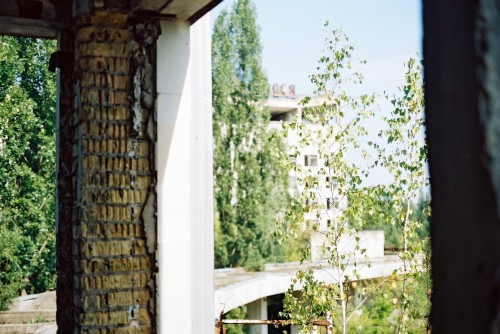 Only when you go further from the bright concourses of the abandoned buildings does this illusion shatter, because every room in every building you visit is full of stuff: human stuff, notebooks, trinkets, portraits, music sheets, reminders that fifty thousand people once lived here, and now there is nobody. In a municipal swimming pool, the diving-board still arches gracefully over a tiled pit filled only with broken glass and debris. In the palace of culture, books lie torn and scattered across the shelves: a moment of panic, frozen. In the rusted tangle of what was once a funfair, you find a child’s shoe on the tarmac: only one.

The most doleful place of all is the school. The floor and tables in every classroom are carpeted with papers: essays, projects, drawings, exercise books half-filled, textbooks half-deteriorated. The little artworks of children who either had to grow up in a foreign city or were denied that chance by the radioactive dust. Things that once held so much importance to some unknown person are now just another fleck in a sea of nuclear debris. Worse still are the toys, the dolls and soldiers that slump forlornly in dusty corners or gleefully display their pathos on desk tops. Then, at the top of a flight of stairs, two crates full of gas masks: a brute intrusion of the catastrophe itself into this poignant little mausoleum. 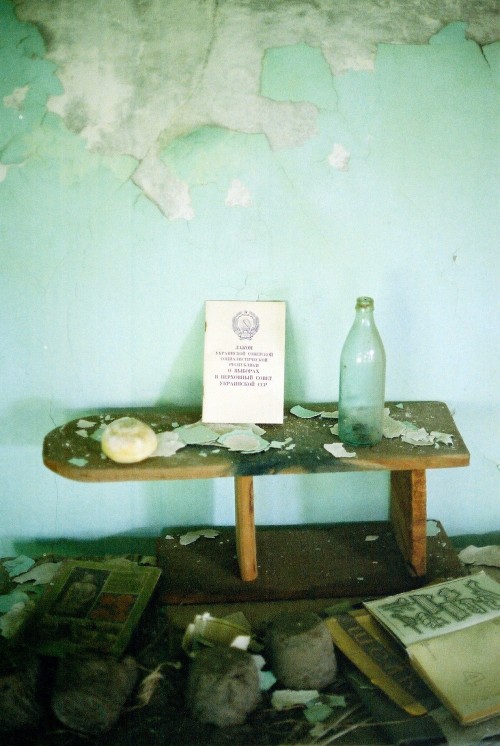 These children lived in a different world. Hammer-and-sickles decorate the corners of their drawings; in one of their art classrooms you find a student’s piece: a lino print of a stylised missile, superimposed with the words нет бомби. The Soviet Union of 1986 was not a worker’s paradise, but the students of Prypiat were still taught that theirs was a society dedicated to the emancipation of humanity, the erasure of alienation, the resolution of antagonisms, to peace and socialism. It was no such thing, of course, but here and there it made its successes, and in Prypiat you can gain the tiniest of glimpses into the Soviet Union as seen from the inside: not as the menacing bear spreading its claws across Europe and Asia, with nuclear warheads tipping its canines, but as a place where a trace of the October Revolution’s optimism and hope for a better society still lingered on. A failure, yes, ultimately, but one at least still haunted by its own spectre.

Back, then, to the prosperous swarm of Kiev. In Independence Square, an old woman, shawled, hunched over, her clothes stained, her legs mottled with purple veins, her arms dappled with sagging skin, the muck of the streets ingrained in the creases on her face, carrying a stinking plastic bag by one shaking withered talon-like hand, shambles from bin to bin, rummaging for glass bottles. Above, the billboards blare out their stern commandments: to enjoy, to be lovin’ it. This is the victory of the West, this is the triumph of freedom. Here, in the bright liberal business-friendly centre of the New Europe, you can find the true ruins of Communism. In the sylvan tranquillity of Chernobyl, something of it still lives.

3 Comments to “I went to Chernobyl”