My world is falling, crumbling apart, life is meaningless & that’s just the start
My hearts so sore, I can feel it breaking & I swear to god it leaves me shaking
Late at night till early in the morning, lying in bed eyes wide open. Didn’t sleep last night, like all the others, instead I just lie crying in the covers
Quick, wipe away all the tears before they come near. must hide this depression & the feelings of fear
For all they know I’m happy & always smiling, but deep inside my soul is dying
I can feel it rotting, it wants to scream, but I won’t let it… not for the time being
I can never tell them how I feel cause the happiness I wear to them is real
For them to hear that I wish I was dead… it would kill them, they’d be filled with dread
So I’ll try my best no to be selfish, I’ll keep my secret hidden & just let them rest
but god I can’t take it much longer… I’ll probably be dead before they even wonder.

The teenage author of this poem, as much as they might object, is not really taking off the mask of their day-to-day ‘false’ persona and letting their real unique self shine through in all its tortured tragedy. They are, in fact, simply putting on another mask: their ‘true’ ‘hidden’ self is as much a construct as the face they show to those around them, and this constructed identity is constituted of all manner of external influences: the hegemonic image of the ‘teenager’, music, cinema, television, and, not least, other poems like this one, which are speckled about the Internet like chewing gum and bird shit on a pavement. This example is just one of a brimming ocean of such poems: all employing the same metaphors, using the same key words, expressing the same sentiments. The hormonal turbulence of adolescence and the alienation that pervades society is not enough to account for the sheer homogeneity on display. They are all fundamentally intertextual, in constant dialogue with each other and with other forms of art, creating between them a holographic projection of decentralised teenagerhood. In writing, the author of this piece is adopting the conventions of depression, moulding herself into a particular archetype. It’s not that the depression felt is somehow unreal, but in its articulation it undergoes a culturally informed metamorphosis. Her poem is not an example of art as a form of self-expression, but of the self as something produced by art.

Alexander Semionov, smashing lazy assumptions about socialist realism like Chuck Norris with a paintbrush. I’m not actually going to talk about this painting but I think it’s pretty good

I point all this out because the teenage angst-poem is held to be a paradigm case of art-as-self-expression, and it is in fact nothing of the sort. Writers and artists do not produce their works in a vacuum. A work of art does not emerge from some cloistered part of the soul in which Pure Emotion quivers, unseen by the rest of the world. Artists are not nexuses of infinite subjectivity. They are conduits through which the fabric of ideas and aesthetics that surrounds them achieves its self-actualisation. Art is composed of references and reactions to tradition or the prevailing conventions of the time (sometimes along with outright theft). This holds true for every facet of art: the teenager’s work above is as much informed by cultural norms and the pre-existing canon as Eliot’s frenzied patchwork-poetry. The function of art has never been unadulterated self-expression but always communication. A work of art is a dialogue between creator and viewer; it is at the point of interaction between the two that the actual creation of art takes place. Good art doesn’t just look nice: it is a palimpsest, a space of continual reinscription. A painting locked up in a safety deposit box is not art, it’s just a bunch of chemicals smeared on a canvas. For something to be art it must be engaged with.

Against this, however, we have the Cult of the Artist, which continues to insist that we must know about Van Gogh’s ear to understand his paintings, which situates the Timeless Artist outside his milieu, which upholds individual self-expression as the ultimate source of all art. This obsession has had its opponents from Keats to Barthes, but still it persists: discredited in academia, it hangs on in galleries and auction houses, it dominates the way art is taught in schools, and forms the underlying narrative for the presentation of art to the public.

We don’t always blindly follow the Cult of the Artist, however. When it comes to artefacts from ‘ethnic’ or aboriginal cultures (usually those we Westerners pushed to the edge of extinction and are now equally intent on preserving in some kind of cultural stasis) there’s no consideration for individual artistry or for self-expression. In the popular examination of such works, an emphasis is placed on social function that is unseen in the criticism of contemporary and Western pieces. Art is seen as being representative not of an individual but of an entire culture, as if every member of the tribe gets together to make bone-carvings or tapestries as a commune. This is the case even in instances when such works are exercises in bragging, monuments to shamanistic prowess like the Mojave Desert petroglyph pictured above.

This distinction encodes the idea that ‘our’ art doesn’t actually fulfil any social function. What happens, though, when artists themselves start to buy into their own cult? What happens when, conscious of the existing traditions, they nonetheless attempt to express their Sovereign Indivisible Self? You get asemic awfulness like abstract expressionism, works that sell for millions but that have no discernible aesthetic or semiotic qualities, shit like this: 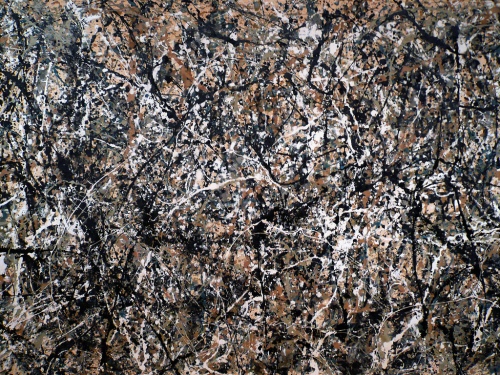 Here we find the artist so engrossed with the idea that they must be expressing themselves and their hidden inner feelings through art that they forget to actually express anything, let alone communicate. This work induces no emotional response and has no intellectual content; any meaning it might have contained is intelligible only to its creator. If I’m picking on Jackson Pollock here it’s simply because he was by far the worst of the bunch, allowing his vaunted apolitical self-expression to be used as an ideological weapon by the CIA, who believed his series of overpriced squiggles to embody the personal freedom that can (of course) only be realised through the market economy. In a way, they were right: individualism suffuses the work; it’s self-expression for its own sake, empty and meaningless.

I’m not trying to argue against abstraction itself. There are plenty of artworks even within the expressionist school that are communicative rather than simply expressionistic; but there remains a distressing trend in contemporary art for pieces so wrapped up in their self-expressive qualities that they make any attempt at hermeneutics impossible. As a counter-example, take a work by Kandinsky, one of the pioneers of abstraction: 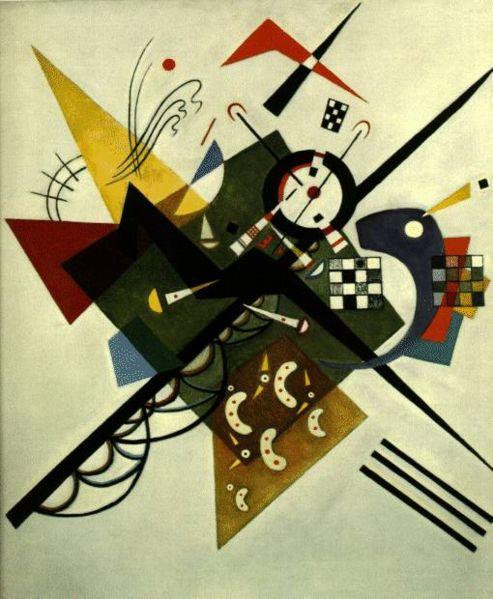 Wassily Kandinsky, Now That’s How You Fucking Do It, oil on canvas, 1923

In contrast to Pollock, Kandinsky’s abstraction (and even his expressionism) opens up a space for interpretation rather than snuffing it out. We are not commanded to stoke the painter’s ego by trying to imagine how he was feeling as he slapped pigment against parchment. The frozen explosion of lines and colours by themselves communicate a sense of unrestrained exaltation, an emotion not just felt by the artist but induced in the viewer; around its edges we find shapes that could almost be recognisable objects but that stop short of actual representation; in the interplay of organic and geometric forms a strange harmony emerges.

The Futurists of the early 20th Century wanted to burn all the galleries and destroy all the cluttering art of the past (it’s a cruel irony that futurism is now just one of the many aesthetic modes for contemporary art to draw influence from). Perhaps it would be better to leave all the art of the past centuries exactly where it is, but rip the informational labels from gallery walls, blot out the name of the author on every book jacket, to encourage expression, but without the self.