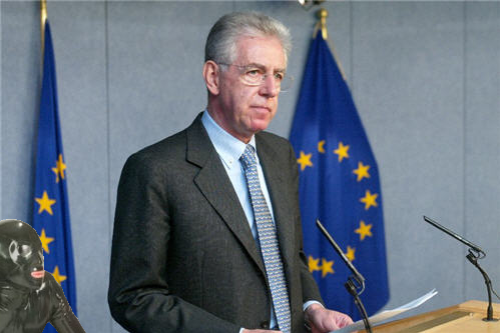 Seriously, who the fuck is this guy? Mario Monti is a personality void, a lurching zombie, a big ol’ sack o’ jowls and rheumy eyes. Nobody with such a bouncily alliterative name should be allowed to be so boring. Gordon Brown, you can tell, likes the odd pint of bitter. Jimmy Carter had his weird thing with peanuts. Whatever, it’s a hobby. What does Mario Monti do for fun? Did Mario Monti ever have a childhood, or did he just cough himself into existence when the dust left accumulating in a forgotten corner of some business school gained sentience? Does Mario Monti have anything under the white Y-fronts he presumably wears, or is he just leathery and smooth like an Action Man? Is Mario Monti a human being, or just a clockwork automaton built in some secret lab out in a mountain bunker? If you prick him, does he actually bleed? There’s a process of thesis and antithesis here, but the dread gravity of Monti is almost enough to make me yearn for Berlusconi’s exuberant silliness. Almost.

Usually I’m all in favour of politicians being humourless weirdos. They’re not like us, they shouldn’t be like us. That’s why I had a lot of sympathy for Gordon Brown, against all my political instincts. Politicians should be real people, ugly people, not yippy grinning idiot replicants like Blair or the Milibands or Clegg or Cameron or Clinton or Obama or Palin or Cain or… the list goes on. But Monti is a very different type of animal (or mineral, as the case may well be) altogether. His dourness isn’t that of a serious and committed politician, it’s that of an obsessive ideological pervert. The technocrats have not been installed to save their countries. They’ve been brought in unelected because, for whatever reason, democratic politicians (even joke ones like Berlusconi) were unable or unwilling to push through the kind of debilitating austerity measures demanded by the markets. Their supposed ideological neutrality is nothing of the sort. It’s only neutral in the topsy-turvy world that has contorted itself into immanence after the end of history, where the primacy of capital, and finance capital in particular, is axiomatic. They are pursuing a specific ideological agenda, and it’s not a very pretty one.

Austerity, pain, savage cuts: this is the language of a leather-clad dominatrix. The people must suffer, they must be punished for their profligacy, they must be made to wince, they must bleed. It’s not their fault, not really, they just got caught up in a spending bubble promoted by the banks, but if they’re not sacrificed to the markets, the Furies of capitalism will tear them into grisly chunks. Or even worse, the financial institutions themselves might have to bear the brunt of their own fuckup. They need a lashing, and government has been marshalled into holding the whip. The fact that austerity economics doesn’t work is almost irrelevant here – what’s important is that it’s deeply immoral. The dawn of the technocrats marks a very strange turn in the supposed function of government – or, more accurately, a falling away of the abstractions that once surrounded it. The State is no longer a king on a throne, ruling and protecting its people. It’s an instrument; its purpose is to suck out as much from the nation as is possible, and deliver it on a platter to the international ruling class. It’s no longer people and their welfare that’s paramount, but the Economy, an ephemeral other dimension floating somewhere up in the sky, a capricious godly realm from which regular demands for new blood sacrifices emanate. And in such a situation, doesn’t it make sense for the State, relegated to a priesthood of the economy, to be controlled by professional vampires like Monti, rather than clunky old ideologues who may well misplace their priorities?

Who is Mario Monti? Well, for a start, he’s prominent in the Bilderberg Group and the Trilateral Commission. These names crop up a lot in the writings of conspiracy theorists, but this doesn’t mean that they’re not dangerous. They may not secretly run the world, they might not be hiding the truth about UFOs or poisoning us all with water flouridation, but they are institutions dedicated to the preservation of capitalism. The Bilderberg Group, where Monti sits on the ‘steering committee,’ runs a series of annual clandestine conferences where politicians and business interests can make arrangements to their mutual benefit. Its agendas are, needless to say, not made avaliable to the public. The Trilateral Commission, where Monti is European Commissioner, is a group aiming to increase co-operation between the elites of America, Europe, and Japan. What both groups have in common is an admirable sense of bipartisanship; both are composed of self-confessed liberals and conservatives, finding common ground in the preservation of the current mode of production. Ultimately, what they are achieving is the creation of a political consensus that supersedes any ideological distinctions, and right now, that consensus is called Austerity.

I haven’t even got to the good shit yet. Up until he was called to assume political power, Monti was an international advisor for Goldman Sachs. Y’know, Goldman Sachs, the bank that all but caused the current economic recession and that is now taking over Europe like a fungal infection. Details of what exactly his role at the bank consisted of are hard to find, but it’s pretty safe to assume he wasn’t urging them to accept government regulation or channel their obscene profits into combating inequality. Monti isn’t a heroically disinterested expert brought in to solve a tricky economic problem, he’s part of an apparatus of capitalist power. It’s his job to act in the interests of the financial elite, and it’s a job he’s carrying out with humourlessly sadistic gusto. Democratically elected politicians are (supposedly, at least) answerable to the people. Technocrats aren’t.

Let’s not beat around the bush here: let’s call this new technocracy exactly what it is: fascism. And let’s call the installation of these new unity governments in Greece and Italy exactly what it is: a coup. Fascism should not be allowed to hide under the cloak of dour pragmatism. Sadism should not be allowed to masquerade as realism. The old fascists of Italy were for the most part political imbeciles, but at least you could tell what they were from a single glance. That’s why the new Prime Minister of Italy should have to wear a gimp suit. Or at least crack a whip every time he says the word ‘austerità.’ Or, at the very least, pose menacingly with a glass of red wine and lowered eyebrows while an ugly cat purrs in his lap.

In Disagreement, the philosopher Jacques Rancière draws an important distinction between la politique (politics) and le politique (the political). Le politique, or la police, is, as Douzinas puts it, ‘the process of argumentation and negotiation among the various parts of the social whole’ that ‘aims at (re)distributing benefits, rewards and positions without challenging the overall balance.’ Against the political stands politics proper, the politics of the masses: while Rancière is suspicious of the idea of a ‘pure’ politics, nonetheless politics is a disruptive force, a political subjectivity with the potential to overturn the social order. The dawn of the technocrats is the political stripped of any vestiges of politics. With the ascendancy of unelected technocrats like Monti and Papandreou, liberal democracy itself is consigned to the graveyard of ideologies. The parameters have already been set by diktat: austerity is the only solution and the order of the political has no need for politicians. In this, the new technocracy is curiously similar to Lenin’s vision of the post-revolutionary state as being involved in little more than accountancy and book-keeping, as outlined in State and Revolution. The difference is that Lenin retains politics through the armed mass of the people, which is to be the real medium of social change. Technocracy maintains no such balance. If the mechanism of government has been depoliticised, then it’s time for politics proper to make itself known.