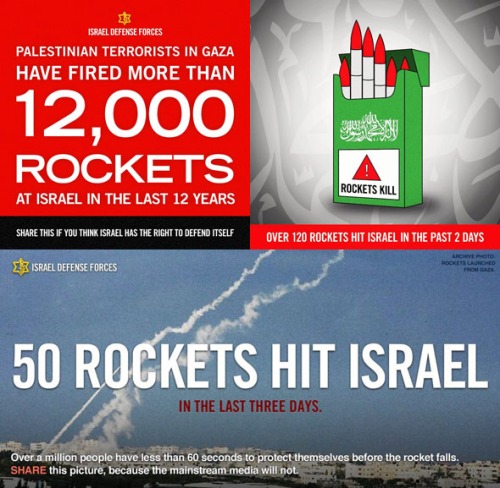 1: Why the rockets? The Palestinians are trying to kill Jews, any Jews, they’re targeting civilians. Except that’s not really the case. The rockets are useless, tin cans filled with horse shit and refined sugar with warheads of dodgy trinitrotoluene. Many fail to launch altogether, most of those that do get off the ground are shot down by Israel’s Iron Dome anti-missile system, most of those that manage to land somewhere generally end up in some empty patch of ground miles from anyone. From the twelve thousand rockets launched in the last twelve years, there have been twenty-two Jewish fatalities. That’s a kill rate of 0.175%. If Hamas were really serious about killing Jews they’d have plenty of other ways to go about it. There are always soldiers patrolling up and down the fence that rings the Gaza Strip, it’d be far easier to have a pop at one of them. Or it’d still be possible to smuggle some gunmen into Israel proper to enact a few atrocities in a couple of kibbutzim – expensive, certainly, but given that each rocket costs about $800, it’d be a far more effective investment. But instead of doing that, they fire rockets. Not just Hamas, either. In times of truce the Hamas police have to go about arresting and torturing members of other groupuscules, gangs of kids feverishly building rockets in basements across Gaza City. Why the rockets?

1.1: The rockets aren’t weapons of war at all. Gaza has no industry, no exports, eighty percent of its population is dependent on aid. Most of the world, its nominal allies included, would rather it weren’t there. The rockets are a form of communication, the only one available. A reminder, a gadfly’s bite, a projection of the reality that is life in Gaza beyond the cloacal confines of the world’s largest prison camp. Extension du domaine de la lutte. Every sad volley of sputtering white-tailed rockets is another desperate whisper: I exist… I exist… And every precision-guided Israeli bomb is a brutally curt reply: No you don’t.

1.2: Well, not quite. Israel might not want the Gazans, but it certainly needs their rockets. The IDF, the most advanced army on the face of the planet, is now not much more than the armed wing of Netenyahu’s re-election committee; a few Israeli lives lost in the cause of party politics is apparently perfectly acceptable. Israel is defending itself – against what? The current escalation has been entirely contrived by the Israeli side. Hamas only started firing rockets after Israel lobbed shells at children playing on a football pitch. When Ahmed Jabari was murdered he was hashing out the details of a long-term truce. The Israeli bombardment of Gaza isn’t designed to stop the rockets, that’s the last thing they want; it’s a deliberate provocation. If enough rockets are fired they can respond however they want. Freud wrote that a masochist is always at the same time a sadist. Hit me, hit me again, let Gaza transform itself into a volcanic fountain spewing scrap iron and potassium nitrate, hit me until the roles suddenly switch and I seize the whip to avenge myself.

1.2.1: It’s not about Gaza at all, it’s about the January election and the upcoming Palestinian bid for recognition at the United Nations. More than that: it’s autotelic, war for the sake of war. The worst thing is that the Gazans must know this; they know they’ve been turned into mere implements. It might have been better for them to have not responded – the only way they could have thwarted their aggressors was by inaction. Impossible, of course. Our form might precede our function, our freedom might be absolute, but if your leader is assassinated on a whim you can’t just do nothing. You have to strike back, you have to launch rockets at Jerusalem and Tel Aviv, you have to play along and carry out your role in a play that’s already been meticulously scripted. Otherwise you lose legitimacy. Hamas is like Sartre’s café waiter, playing at being itself.

2: The Palestinians fire rockets from densely populated civilian areas. They hide behind their women and children. Of course they do. Why shouldn’t they? They know that Israel needs to keep its end up in the propaganda war. They know that Gaza is full of mobile phones with their all-seeing eyes. No sensible military commander would see the opportunity to attack with impunity and not take it. What should they do instead? Should they march out in formation to a patch of dust outside Gaza City, nice and gentlemanly, with muskets gleaming in the sun, so an Israeli jet can come over and wipe them all out without injuring any photogenic kiddies? Supporters of Israel continually voice their disgust at how Hamas is waging its war. How would they prefer them to do it? Maybe the Knesset should approve the sale of a few unmanned drones to the Palestinian resistance. Then the two sides could both hide themselves safely away, firing missiles with xbox controllers and calling each other fags through their headsets.

2.1: More to the point, Zionist disgust articulates itself in a strangely constricted moral field. Palestinians try to send their rockets into population centres. Israelis, meanwhile, talk sickeningly of precision warfare and surgical strikes. As if the airdropped leaflets warning of a raid excuses the raid itself. As if it’s perfectly admissible for them to kill whomever they want, as long as they’ve bloodlessly decided on which particular person they intend to kill. As if their ongoing colonial project is a-ok as long as they don’t murder too many innocents. As if the specific tactics of Hamas invalidate the justice of the Palestinian cause.

2.1.1: The leaflets say: avoid Hamas operatives, don’t go near them, we are trying to kill them, we are determined to defend ourselves. Hamas is the elected government in Gaza. The leaflets are telling people to avoid their own state. The IDF is a Deleuzian nomad, a war machine defined by its absolute exteriority, warding off state-formation and smoothing striated space, its missiles describing lines of flight. Liberation.

2.2: Talk of collateral damage is always sickening. We’re not trying to kill you, they say, so if you die it’s not our fault, it’s the caprice of chance, we will express regret but never apologise. The language of surgical warfare is nothing more than a feckless shrug at the dozens of civilian deaths. At the same time, though, some of what the Israelis are saying is true: millions of dollars of munitions have been fired at Gaza in hundreds of air assaults; considering that, the fatality rate is preternaturally low. So if these raids aren’t causing casualties, what are they targeting? Arms caches, military posts, and so on. But Gaza isn’t that big a place. During the last Israeli massacre in Gaza, they destroyed water treatment plants, telephone exchanges, factories. Organs of the state, after all, and the state is controlled by Hamas. David Harvey calls this kind of thing ‘creative destruction on the land’ – capital always needs somewhere to reinvest, it needs that magic three percent yearly growth; if you bomb a factory then you get to award the contract for its reconstruction afterwards. I don’t think it’s just that. During periods of truce, Israel is forever breaking its own blockade. It sends mountains of aid into Gaza, armoured vans full of shekels to prop up the banks, trucks full of food in quantities determined by the government’s coldly calculated calorie allowances. It’s a propaganda coup. Such generosity, we’re feeding our prisoners, we’re supplying their services, because for some mysterious reason they can’t do it themselves. And after all this, the ingrates dare to fire rockets at us.

3: And the people living in Sderot and Ashkelon and Nahal Oz, who famously have sixty seconds to scramble into their bomb shelters, whose skulls resound with the sounds of sirens and impacts – what are they doing there? Unlike their less fortunate neighbours, they have no wall keeping them in. Is their colonial project so important that they’d subject their children to these terrors? There could almost be a kind of wild romanticism to it: desert settlers, building a new rugged Judaism out in the scrublands, where the ground is hard and the sun is blistering and the sky spits a constant barrage of rockets. They could culture a good strong fanaticism out there, piously farm the chthonic irrationality that bubbles up from inbetween the rocks. That could be forgivable. Of course the actuality is the total opposite. In interview after interview the residents of these towns say the same thing: they just want a nice quiet life, they want things to go back to normal, and the slaughter in Gaza is a fair price for their diazepamoid banality. They want the humiliation – sometimes the extermination – of an entire people for the transcendent Good of low house prices and a tolerable commute. Sderot is a blasphemy, a monster sitting on the corpse of the Palestinian village of Najd: rows of houses with their pitched red roofs sprouting along broad avenues, delicately pruned palm trees rising from nail-clippered grass embankments, dreadful public sculptures. Its people are Hebrew-speaking Americans, displaying the same kind of petty anaesthetic viciousness that has the sublime crags of the San Gabriel mountains intercut with lines of identical bungalows, that builds Burger King restaurants by the side of the freeway in the Mojave Desert, that reels out electrified fences on the banks of the Rio Grande. Kill them all, they say. They’d enact an anodyne genocide.

3.1: Architecture is the continuation of war by other means.

3.2: Eyal Weizman told us that the Israeli army reads Deleuze. If they’re not doing so already, the Palestinians should read Negarestani. The war is being fought in the air, with drones and rockets, but its source is subterranean: the tunnels into Sinai, the bomb shelters under Ashdod. The surface is a fragile and ( )holey membrane, a plane of peril.

4: My first reaction to a monstrous injustice being carried out against people on the other side of the world is to find someone who supports it and argue with them. It’s pointless, and probably not particularly healthy, but what else is there? During Operation Cast Lead, I was baton-charged by police outside the Israeli embassy in London. There were thousands of us demonstrating: bourgeois students like myself, Hamas supporters in keffiyehs, sweet old ladies hoisting banners of Stalin. When the last remnants of the protest were broken apart by riot police, I went home bruised and exhausted to find out that Israel had mounted a ground invasion while I was out.

5: Žižek describes war as a kind of phatic communication. It’s true that when two radically different cultures first encounter each other, they’re always very curious: they want to know about each other; chiefly they want to know how the other side dies. Now they have new ways of talking. The Israeli Defence Forces and the Izz ad-Din al-Qassam Brigades are idly chatting on Twitter: swapping threats and insults; disputing claims of downed planes, rocket attacks, civilian casualties. The IDF operates a programme for its online sympathisers: by sharing propaganda photos on Facebook, you can rise through imaginary military ranks. You too can serve in the Israeli armed forces, fighting the war from your laptop. Actually, the opposite is taking place. The keyboard warriors aren’t being integrated into the military, the military is turning into part of the online commentariat. It’s turning into me. Baudrillard said that the Gulf War didn’t take place, that the Americans were fighting a nonexistent enemy. Now both sides are nonexistent. The war is a staged event, a text; it exists not to be won but to be interpreted. It’s a fiction being played out in real life.