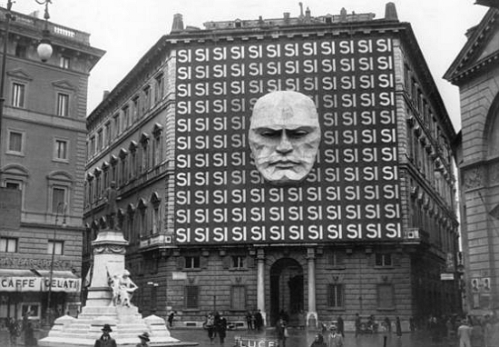 In my last piece, I wrote that ‘microfascism has taken over the world.’ In that line I was adapting the Deleuzian use of the term: Deleuze draws a line between historical Fascism (of the type that came to power in Germany, Italy, Romania, etc) and microfascism: a field of destructive, authoritarian impulses that permeates capitalist society. In Capitalism and Schizophrenia microfascism is the result of a blocked line of flight, a molarisation of repressed desire; in my essay I was considering the possibility that microfascism could function molecularly as well as through molarity. A deviation, but one with its genealogy in the text: Deleuze and Guattari continually equate the repressive totalitarian with fascism. In doing so they’re broadly in line with much of the radical left: communism is presented as one side of a polarity, with the opposite being fascism. Fascism is abstracted from being a real historical ideological movement into a general principle, a kind of radical Evil.

In a recent article in the Telegraph, Alan Johnson describes Slavoj Žižek as a ‘left-fascist.’ Clearly this is meant to be a criticism, and there’s certainly much to dislike about Žižek: his egregious antiziganism, his refusal to support genuine socialist movements in Latin America while singing the praises of Occupy Wall Street, his ‘ironic’ construction of a cult of personality. It’s not this, however, that riles up Alan Johnson. Instead, Žižek is criticised for ‘believ[ing] liberal civilisation is a nightmare from which only violent revolution can awake us,’ for his ‘contempt for the bourgeoisie,’ for advocating ‘unquestioning fidelity to a transcendent Cause’ as a cure for psychosocial ills. All this, Johnson informs us, means that Žižek has far more in common with interwar Fascism than with the far Left. Well, no. Critique of liberalism, revolutionary agitation, rejection of bourgeois values, and sublimation of the individual will within the revolutionary cause are all not only compatible with Communism, but essential to it. Johnson calls Žižek a fascist because it has become an epithet: he calls him a fascist for being a Communist. It’s idiotic, but even so, he touches on something important.

Every time the English Defence League tries to march its sorry band of hooligans past a mosque or a road with more than one halal butcher’s, leftist organisers drum up support against them with a single word: fascism. The EDL aren’t Fascists. Neither are the BNP. Neither is Marianne Le Pen. Neither is George W. Bush. Fascism is a Weltanschauung; like Communism, it is a complete and all-encompassing movement. The EDL doesn’t care about Nietzsche, or Hegel, or Giovanni Gentile, or Third Positionism. They’re racists, not Fascists. Racism proceeds from Fascism but is in no way essential to it: even the 1934 Montreux Fascist Conference was riven by disagreements over whether Fascist societies could be multiethnic. To call the EDL fascists is to credit them with a level of theoretical and philosophical awareness that they don’t possess.

Well, so what? Fascism is universally reviled; if applying it to groups like the EDL bolsters opposition to them, why not do it? If transmuting fascism into a general principle allows us to easily identify our enemies, isn’t that harmless? Not really. For a start, conflating racism with fascism blinds us to the racism outside the ‘fascist’ fringe. If fascism is racism then non-fascism must be non-racist: the anti-fascist campaigns that relentlessly attack groups of the far right are much more forgiving of the everyday racism practiced by liberal-democratic governments, and tend to gloss over completely racism on the left (such as Žižek’s). ‘Fascism’ becomes an immense distraction: as Badiou points out, the dogmatic abhorrence with which nationalist parties are held only allows systemic racism to go unchallenged.

There’s also the potentiality for misdirection. It’s not just the Left that abhors fascism. When fascism is turned into a universal principle of Evil, it becomes a useful tool for imperialists and reactionaries. Witness the coining of the term ‘Islamofascist,’ used by neoconservatives – who were, let’s not forget, mostly ex-Trotskyites – to drum up support for the wars in Afghanistan and Iraq. Fascism untied from its historical roots becomes a floating signifier, utterly meaningless.  You can use it on anything. The Fourth International referred to social democracy as ‘social fascism’ because of its class collaborationism; one could equally call an apple a ‘fascist orange’ for refusing to properly recognise its internal divisions. As Alan Johnson inadvertently demonstrates in his essay, anything can be fascist, but especially anything with transcendent political goals – in other words, any ideology opposed to hegemonic liberalism. Abstracting fascism plays directly into the hands of the reactionaries: the status quo is good, any revolutionary challenge to it is absolute Evil.

Most of all, though, the abstraction of fascism contradicts historical reality and allows us to ignore important historical lessons. What is fascism? Fascism is a deviation from socialism based on idealism instead of materialism and the principles of nationalism and class collaboration instead of internationalism and class struggle; it is an aestheticisation of socialism. The founding ideologues of Fascism weren’t diametrically opposed to socialism; they emerged from the same philosophical branch. Giovanni Gentile wasn’t only the greatest scholar of Hegel since Marx, he borrowed extensively from Marxian thought. Georges Sorel was an orthodox Marxist and a supporter of the Bolshevik revolution; his Reflections on Violence remains a useful Marxist text. It’s time to dispense with Trotsky’s old ‘materialist’ analysis of Fascism: despite its reactionary quality, Fascism (outside of Germany, at least) was never a rearguard action by the ruling classes to protect their interests. It was a chimerical mass movement, a branch of socialism that went hideously awry.

Foucault describes how madness is turned into a unified principle of pure chaos so that society does not have to see itself in the madness of individuals. In much the same way, by turning fascism into an abstracted opposite principle, the Left protects against having to see itself in historical Fascism. By painting fascism as pure reactionary ideology, we’re not forced to confront difficult questions about the teleological inevitability of socialism. By considering it as the violent essence of capitalism, we can ignore the fact that socialism and Fascism arise under the same material conditions. A while ago, I wrote that Leftists ought to be more critical of 20th century Communism than its most vociferous opponents, that we should be utterly ruthless, picking apart its slightest failings – while at the same time maintaining fidelity to it and recognising it as fundamentally ours. In Marxist practice, ruthless criticism is the highest honour. The same goes for Fascism: by recognising ourselves in it rather than considering it as a hideousness somehow inherent to humanity, we can learn the catastrophic consequences of bad theory and, hopefully, prevent them from happening again. And by decoupling Fascism from absolute Evil, we can even learn from Fascist thinkers. As Johnson notes, interwar Fascists made lucid and piercing critiques of liberal democracy and bourgeois ideology, and stirring calls to collective action in the name of the transcendent Cause. He seems to think that these points are invalidated by the fact that they were articulated by Fascists. Historical materialists, conscious of the extents of their ideological family tree, should know better. These things belong to radical egalitarianism: they are not the constituent parts of radical Evil, and we should not surrender them.