Dan Brown’s new novel Inferno went on sale yesterday and has already careered straight to the top of the bestseller charts. Naturally, I was a little jealous. However, unlike the throngs of snobbishly unpublished authors who take it upon themselves to parody Brown’s works, I decided it would be far more productive to try to learn from someone so clearly a master of his craft. That said, I needed an edge on my competitors, and just reading Inferno wouldn’t cut it. I knew his next novel, scheduled for publication in 2015, had already been written. So at midnight last night I parachuted stealthily out of a Cessna 172 Skyhawk plane with a Garmin G1000 Primary Flight Display flying at 13,000 feet over the small Westphalian city of Gütersloh – home to Bertelsmann SE & Co. KGaA, parent company of Doubleday, the publisher of Dan Brown’s novels. Landing on the roof of the squat office building, I quickly incapacitated the guards, who were armed with Heckler & Koch MP5 sub-machine guns, for reasons best known to themselves. Gingerly, I entered the building through a ventilation duct. Eventually I found myself outside the room where Dan Brown’s next novel was being kept. What I found in there revolted me. The air stank of ordure and rotting bananas. The shit-speckled walls, the piss-sodden carpet, the flies, the rats. About a thousand primates sat there on ergonomic office chairs, chained to antique typewriters. The macaques and tamarins were visibly distressed, straining at their manacles, screeching helplessly, banging their heads against their desks. A few chimpanzees had resigned themselves with seeming good humour to their work; while one typed, another groomed its back. By the far wall, a sad-faced old orangutan slowly and arrhythmically pressed the ‘H’ key, over and over again, staring dejectedly at the reams of paper it had yet to fill. The baboons seemed to be in charge of the place, though. They were unshackled. As I entered they shrieked in unison, baring their yellow fangs. I grabbed a few sheets from the typewriter of the nearest gibbon and ran. As I left the building, pursued by the chilling ululations of the baboons, I briefly passed Bertelsmann’s Employee of the Week board. On every square was a picture of a baboon. And at the top, smiling benevolently down on them, was a photo of the Reinhard Mohn, the corporation’s legendary former CEO: a silverback gorilla, staring with a pipe in his mouth and the faint gleam of a deep unknowable wisdom in his round brown eyes.

The lines that follow are all that I could rescue from that room.

THE STORY SO FAR: Around the world, hundreds of men and women drop dead on the same day. The tall man Chad McRib, professor of Obscurantology at Hardton University, is accused of complicity in their deaths. Fleeing the French police through the streets of Paris, he finds himself catapulted into the ancient mysteries of the 20th Century, as it emerges that all of the victims had at one time or another been analysands of the psychoanalyst Jacques Lacan. After Chad enlists the help of the beautiful European nuclear scientess Slavojina Zizek, it is discovered that Lacan had been highly radioactive. It was for this reason that he had gone against the Société Parisienne de Psychanalyse in introducing shorter sessions: he knew that prolonged exposure could give his patients a lethal dose of radiation. But who had irradiated him, and why? Chad and Slavojina delve into the sewers of Paris with a stolen copy of Lacan’s notebooks to find the answer, but find themselves trapped in the terrifying Mirror Stage, and shadowed by mysterious gazing figures…

The tall brown-haired man walked into the room. The man was Chad McRib, who was tall. The attractive woman Slavojina Zizek clung to his arm. The whirr of a VRF (Variable Refrigerant Flow) air-conditioning unit hung in the air, which was suffused with the hum of a VRF (Variable Refrigerant Flow) air-conditioning unit.
“We’ll be safe here, Slavojina,” Chad said. “As we have checked into this hotel, the Hôtel Fièvre Gastrique on the Rue  Grossier, under false names, the Big brOthers will be unable to find us here, in this particular place.”
Slavojina reclined delightfully on the expensive bed. “Zhe question ish, what ish it we should we do now?” she purred, like a cat suddenly teleported to Planet Milk. “Theesh I claim: we musht carry out the sexual act, it ish our duty, in zhe Kantian senshe.” Her hand fluttered teasingly over her eyebrow and the bridge of her bulbous nose as she grunted sensuously.
“While it is true that we are now experiencing a high level of mutual attraction, especially when compared to our first meeting two days ago, during which you were somewhat wary of me, we have no time for that,” said Chad, who was high in stature and had brown hair. “Whoever those people are, they won’t stop looking for us until they have these écrits,” he continued cromulently. “Whatever the secret is, it must be hidden in this notebook,” he mouth-flappled.
The notebook was square and had yellowed over the years. Its cover was black with embossed gold lettering. The paper was made from pine woodpulp. 60% of the pulp that had gone into the notebook had come from a single pine tree. The tree had been planted in 1928 near the Spanish town of Rascafria. In 1941 a Spanish imperial eagle (Aquila heliaca adalberti) had nested in its branches like a zeppelin docking at the Empire State Building. The eagle was later shot by a hunter named José Mercader, who had a thick moustache and later fell into penury for unrelated reasons. None of its chicks survived. Chad McRib opened the notebook with his fingers, which were long and slim, much like his body, which was tall and slim. He read a few pages, like a crowded minivan plunging tragically off a cliff. I’ve got it, he thought. If the unconscious mind is itself a series of chains of signification, then literally everything has a hidden meaning and every single object is part of a vast paternal conspiracy. But what could be the purpose of it all? Suddenly, he knew.

He then told Slavojina what he had discovered, which was very unsettling and also exciting. “It is commonly said in the bar-rooms and crack dens of the world that Lacanian psychoanalysis is difficult,” the professor said, thrillingly. “Indeed, many of my students have told me that they find it difficult to read Lacan, because his words are difficult to understand and the order in which they are placed also makes them difficult to understand,” the noted academic who was on the run from the police said, in tones that made it sound very exciting. “However, what if the reason for this complexity is that Lacan’s works in fact carry a hidden message, explaining who had given him his continual doses of radiation? For instance, Lacan attempted to explain psychoanalytic concepts through mathematical formulae. The traditional interpretation is that he did so as a half-serious attempt to give his theories objective mathematical weight. But could it be something else?” The teaching-type person, who was very clever and also had brown hair, directed the woman’s attention to a diagram in the notebook. “Look at this,” he said. 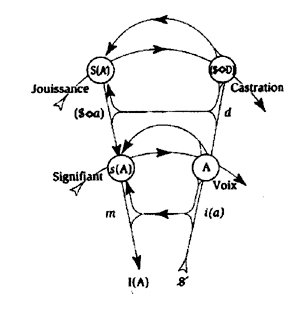 “Does thees not demonstrate precisely zhat in making a line acrosh zhe face of zhe Real, zhe act of represhentation ish itshelf monstrous, in a senshe deesgushting?” Slavojina giggled.
“Exactly,” said the man, who was called Chad McRib. “It doesn’t seem to make any sense. But what if we tried to solve it as if it were a perfectly ordinary triquadratic biequation?” He scribbled in the notebook with the furious zeal of an itinerant lobster, using a Pentel GraphGear 1000 PG1015 automatic pencil. “You get this.”

“My God,” said Slavojina. “Pure ideology.”
“I think the whole book is a map” said the fêted head-think-brain-man. “It’s a set of directions. Where is the name of the Father written in Paris? Above the altar in Notre Dame. And what forms a phallus? The Eiffel Tower. Somewhere along the line between those two points an incredibly precious object is hidden, an object people have been seeking for centuries. That’s what the Big brOthers are after. Lacan’s notebook gives us the route to the objet petit a. The ultimate object of desire. The Holy Grail, Slavojina.’
“But zhees ish eempossible,” said Slavojina. “Zhe objet petit a ish unobtainable. Zhat ish zhe source of eets transcendence.”
The famous professor flipped through the square book. “What if I told you that I know exactly where it is?” the elegant variation pronounced.
“In zhe filum of Heetchcock, zhe gaze ish never a pure gaze, eet ish alwaysh accompanied by zhe threat of viyolence,” Slavojina gasped.
“You’re right. We haven’t a second to lose.”
As the tall man Chad McRib and the attractive woman Slavojina Zizek stepped out of the hotel onto the Rue Grossier, a dark bad figure of a bad man lurking in an alleyway watched as they hurried off towards the Seine. He cocked his SIG P226 pistol and began to follow them.

A short man burst into the boardroom of a superbly appointed office building in New York. “Sir,” he said, proffering a photo of Chad exiting the hotel. “McRib is back.”
Sitting alone in the room, which had excellent views over the river, wearing a sharp navy-blue three-piece suit, the Master-Signifier smiled in an evil way as would befit someone who is obviously the villain in this story. “All is going according to plan,” the Master-Signifier said. “Once McRib finds the objet petit a for us, no power on Earth can prevent us from crushing the schizoanalysts and achieving world domination.’

Will our heroes find the objet petit a? (no.) Does it even exist? (no.) What about the Big brOthers, do they exist? (no.) Will Chad uncover their plot before the radical schizoanalysts detonate a nuclear bomb over Vienna and wipe out the Freudian legacy? (no.) What unexpected twist awaits us before the novel’s end? (Slavojina is quite clearly a man.) To find out, you’ll just have to wait until 2015.

3 Comments to “Exclusive extract: The Lacan Conundrum, by Dan Brown”