The passion according to Luke 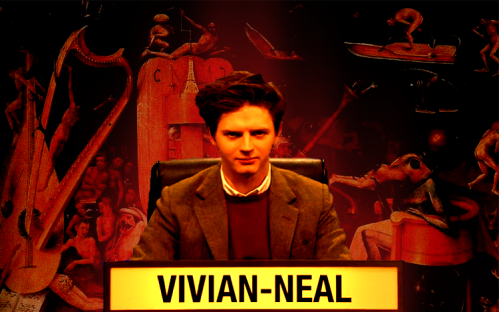 Everyone has their fantasies. There are people who dream of chains and rope and hot wax, silent watching eyes, dungeons of degradation, masked strangers, shiny black leather. Then there are the perverts, people who get unaccountably excited by the idea of second homes and high-quality consumer goods, holidays in Europe, tasteful interior décor, and a high-paying job in a full-employment economy. Repulsive as they might be, even these fantasies help sustain the subject of the fantasist; they don’t really hurt anyone as long as nobody tries to actually put them into practice. This is the rule of fantasy: you can act it out as an image of an image, but it can never actually come true. Once it does, it loses all its power and enchantment. There are many fantasies like these, tiny glittering gasps of desire, but they’re all in orbit around an invisible sun, one single hidden image that gives them their allure: the ‘foundational fantasy,’ represented by Lacan in the matheme $ a. In this formulation $ represents the castrated or ‘barred’ subject, forced to understand the world through images in response to a primordial lack, with a standing for that absence, the transcendent and nameless object of desire. What’s notable about this matheme is that it lacks an intermediary symbol (such as ♢ standing for a problematic relationship, as in the formula $ ♢ a for neurotic fantasy): between the two terms there is no relation. Fantasy is grounded in a double absence; the fantasist never necessarily knows the full content of their fantasy. You have to browse through an infinite collection of images and see which ones excite you, find out what kind of radiation the black hole of your desire emits. Here are a few fantasies. See if they work for you.

Luke Vivian-Neal, of the School of Oriental and African Studies team in the 2013-14 season of BBC2’s University Challenge, has a woman with beautiful hair brought to him, saying he simply wishes to examine her hair; but he cuts it off very traitorously and discharges upon seeing her melt into tears and bewail her misfortune, at which he laughs immoderately.
Luke Vivian-Neal, whose team made it to the semi-finals before being beaten by Somerville College, Oxford, sups at an immense table; for light, he has six burning candles, each inserted into the ass of a naked girl lying upon the table.
Luke Vivian-Neal from Lusaka in Zambia, who is studying Chinese but also knows a lot about words of Arabic origin and the location of the Schönbrunn Palace, attaches a slender but attractive girl to a large rocket, the fuse is ignited, the rocket ascends, then returns to earth with the girl still attached.

These are all from entries in the Marquis de Sade’s The 120 Days of Sodom, a pornographic novel that quickly descends into an early example of the Buzzfeed-style listicle; six hundred numbered acts of debauchery and murder presented with very little adornment or narrative sequence. De Sade was a fantasist in the classic mould: while his libertinage caused some scandals he was still entirely devoted to his wife and obedient to his mother; in his actual sexual practices he tended far more towards masochism than the sadistic tendency to which he gave his name. What’s interesting about the 120 Days of Sodom is that all these deeds are described not as fantasies or stories, but as passions, divided into les passions simples, doubles, criminelles, and meurtrières – all this despite the somewhat offhand way in which de Sade’s heroes carry out their orgies and massacres. In traditional medieval dualism, passion was opposed not to boredom or indifference but to action; it shares a Latin root with passivity. Pneumatic theory, which posited a substance called pneuma through which physical sense impressions were mediated into mental images, held erotic desire to be a passion: you are not an agent, a subject desiring an object, but a patient, the object of a desire that acts on you. Passions are pneumatic images,sensations from outside that seize and overwhelm the subject. For the advocates of courtly love, the idea that you might grab hold of the source of your desire and actually fuck them wasn’t just crass and unseemly; it missed the point entirely. Actions belong to the body, and passions to the mind; consummation of a passion is nothing more than the contemplation or the expression of an image. It’s in this context that de Sade’s passions begin to make sense. His passions are fantastical images, stories within a story, emerging from a void: mise en abyme.

Luke Vivian-Neal is clearly a very passionate man. Or, in the words of various Twitter commentators, he is ‘ever so intense,’ ‘a prime example of a secret serial killer,’ ‘the sort who would wear your skin to a party,’ ‘an evil Paul Merton,’ and ‘actually going to kill all of us #thoseeyes.’ He’s certainly the most interesting contestant University Challenge has had in a while. He holds his forehead low, his hair flops over his eyebrows, and he stares up at the camera with what appears to be utterly undisguised loathing. When he answers a question correctly there’s a tiny grin, a fractured chink through which the horror of the Other’s enjoyment can be glimpsed. When he gets one wrong he looks omnicidal, a glowering thundercloud of a human being. He definitely has a rich inner life. This effect is only heightened by the rest of the SOAS team: motherly Weber, trying to cheer Vivian-Neal up with a smile and a pat on the back; team leader McKean, the cheerfully studious everyman; thoughtful and deliberate Figueroa. They don’t seem to be from the same planet as Vivian-Neal, let alone the same university. It’s not hard to imagine them as the cast of a University Challenge spinoff, a tense psychological thriller in which Vivian-Neal slowly picks them off one by one. Of course, the most important thing about the passion of Luke Vivian-Neal is that it’s a passion: something that acts on him from the outside, an image, a fantasy. Real serial killers are, for the most part, astonishingly boring people; not cold and steely and erudite like Hannibal Lecter or Norman Bates, but driven by dull brutish psychopathy. If Vivian-Neal actually had bodies in his freezer, he’d lose all his fascination. The fantasy of the smart, brooding, potentially murderous young man isn’t his – it belong to us, the viewers.

When I was briefly living in America, I naturally took it upon myself to smugly educate as many of the country’s inhabitants as possible in the wonders of British television. These efforts had various levels of success. Some people liked Peep Show, fewer had patience for Stewart Lee, but University Challenge was met with unanimous approval. Part of its appeal might have to do with the show’s inherent excess: these people are quizzed on knowledge that is for the most part fundamentally useless, for what appears to be no real reason, and without even getting a cash prize at the end. There’s a gleeful superfluity to it that fits in well with the sprawling all-consuming mentality of Los Angeles. At the same time it’s something of a human zoo: you’re presented with a constant succession of endearingly dorky and often utterly strange characters, but in a way that deliberately encourages the formation of fantasy. Unlike some quiz show hosts, Jeremy Paxman never asks his contestants how they’re feeling, or who they’ve got supporting them back home, or what their hopes and dreams are; you have to work it all out (or invent it) based on their eagerness with the buzzer, their spluttering when named, the things they know and the things they don’t, their reactions when they win and when they lose. University Challenge reproduces, in laboratory conditions, the formation of fantasy as a defence against the lack that inheres in the Other. No wonder so many of its contestants become minor sex symbols. Intelligence might be sexy, but there’s nothing that stimulates neurotic attachment like a void.

The fantasy of Luke Vivian-Neal is of someone somehow inhuman, someone whose mind follows different rules to the rest of ours. This image forms part of a process of transference. All those desires that the viewer at home watching University Challenge isn’t comfortable with are shifted onto him; he becomes a receptacle for our own deadly passions. In fact, unlike the neurotic voyeurs observing him on their screens, Vivian-Neal seems fully healthy and fully human, entirely unashamed of himself. When he gives that sullen stare, he’s communicating exactly what he wants to.  There might be murderers in this season of University Challenge, but he’s not one of them. The SOAS team lost a decisive quarter-final match to Trinity College, Cambridge 280 points to 105. Vivian-Neal was inconsolable; he couldn’t even bring himself to say the traditional end-of-match ‘goodbye’ to the viewers. The standout character of the Trinity team is Filip Drnovšek Zorko. It’s not just his excellent name, which the announcer reads out with an air of unbridled excitement: Drnovšek Zorko appears to be a genuinely agreeable person. He’s a lamb among wolves. The rest of the Trinity team, with their collared shirts and v-neck jumpers and gemstone-dead eyes, are all monsters of the Oxbridge elite – the same British impulse that conquered the world and killed millions out of sheer boredom. Vivian-Neal has an authentic misery; the only thing they communicate is a shark’s mindlessly propulsive self-satisfaction. Phantom pith helmets hover over their heads. In tonight’s final, Trinity play against Somerville, Oxford for the title. There’s every chance they’ll win; they’re an extremely effective team. If they do, everyone goes home happy. If they lose, the last thing Drnovšek Zorko will see will be his teammates’ pupils narrowing to reptilian slits and their fangs swooshing down from their mouths before they consume him.