In the Hegelian system the history of mankind no longer appeared as a wild whirl of senseless deeds of violence, all equally condemnable at the judgement seat of mature philosophic reason and which are best forgotten as quickly as possible, but as the process of evolution of man himself.
Engels, Socialism: Utopian and Scientific 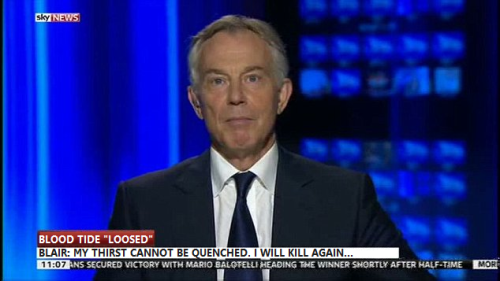 There was meant to be progress. Slowly at first, and then with gathering confidence, human beings were supposed to be turning the world from a Hell we couldn’t understand into a finely tuned machine that we could. We would predict the weather and split the atom and put a brushed-aluminium fridge-freezer with an ice-cube dispenser in every household, whether they wanted one or not. It was all a lie. What’s been called progress was nothing more than a war of annihilation against the ghosts. At first our odds were slim: the ghosts outnumbered us several times over. Every little copse had its nymphs and sprites; every wild animal carried the head of a god; in every home the jealous ancestors would take up their positions by the fire. It took centuries, but we pushed them back. We got rid of the strange and powerful forces that had controlled the clouds and the rain, and replaced them with tiny floating particles to form the seeds of water droplets. We slowly starved the moon-goddess to death, and replaced her with a big lump of floating rock; we even sent an expeditionary force to its surface to plant a flag there and confirm its lifelessness. All the whispering local spirits were massacred, and their ownership of the sacred sites was passed on to brutal landowners. You could be forgiven for thinking that we’d won. The universe makes sense, after a fashion; a lot of it be explained without any need for ghosts or spirits. If you want, you can now climb Mount Olympus yourself: there are regular tour buses from Athens; if the gods were ever there they’ve now moved on. Machines have been sent out into space to let us know exactly how boring it all is. But if that’s the case, and the magical forces that once haunted every inch of our world are gone forever, then just what the fuck is Tony Blair?

Tony Blair rises every couple of months, like a bubble of swamp gas. First there’s an uneasy buried rumbling, then small tremors shake the surface, and then suddenly he bursts through, a gassy eruption stinking of farts and sulphur. It doesn’t matter how many rounds you fire into his shambling frame; he just won’t die. Whenever something unpleasant happens in the Middle East, whenever some huge corporation is discovered to be starving people to death or poisoning them through calculated negligence, whenever the chaos of the international order starts to wobble into another death-spiral, a damp wind blows through a graveyard somewhere in England and Tony Blair emerges from his tomb. There’s something viscerally revolting about the man. His fake chumminess and his sham gravitas are both as nauseatingly contrived as his shiny oily skin, hiding what can only be bloated rotting organs inside. He’s a gremlin, an incubus, very strange and very cruel and very foreign to our world. But still there’s a decaying vestige of that charm, the memory of the love in which he was once held, that universal joy when he finally ended a generation of Conservative rule by ending the Tory monopoly on evil. We’ve deluded ourselves into thinking that we’ve learned from the experience, we’re past all that now, but every time Tony Blair re-emerges there’s still a shock. There he stands, with his jug ears and his peg teeth and his manic eyes full of an otherworldy certainty – it’s like the shock of seeing a former lover going through your bins at night, or a long-forgotten childhood toy waiting for you on your bed. He represents something that’s been repressed, and even though the repressed always returns, it’s always a surprise. Who is this hideous figure? Why is he still alive? Why won’t he just leave us alone? Of course, Tony Blair was never alive. He’ll never leave us alone.

Older and wiser societies than ours knew about Tony Blair, and they knew to be afraid. Throughout history he’s arrived among the homes of men and promised a very slightly better life, before suddenly carrying out inexplicable destruction.The Sumerians knew him as Tešgali, a snake-demon twenty miles long, who would enter a walled city in the guise of a man, and then uncoil his vast scaly bulk and devour everything inside. This knowledge was passed on to the early Christian Gnostics, who called him Tialdabaoth, the blind creator-god with the head of a lion and a serpent’s tail, architect of all madness, who created this world out of spite and envy and who tried to prevent the first humans from eating from the Tree of Knowledge. Country folk of the Middle Ages were terrified of the bálfar, creatures of beguiling appearance but malicious intent, who lived in the marshes and the wildernesses but would sneak into human villages by night. Certain trees were sacred to these bálfar, and cutting them down would mean imminent death; if your house stood in their path they would tear it apart. The bálfar were known to kidnap human children and even grown adults (several Old English epics tell the story of a man’s doomed quest to retrieve his wife from their kingdom) and replace them with one of their own, a creature identical in all respects but for a savage listless boredom. They ruled by inscrutable and murderous caprice, but it was possible to appease them with small offerings: a ring of flowers, a saucer of milk, a thimble. Those they took favour on would be treated to a great feast, but like all elfin magic this was a simulacrum: eventually the guests would realise that the food was not real, and that they were eating dirt from the ground. Tony Blair even appears in the Daemonologie of King James I, as Tibericaxus, a Deuill who being of great Charme and Guille, sneaketh into the homes of the Godlie, and perswades them to addict themselues to his seruice.

But soon after that something changed. With the dawn of the Enlightenment people stopped believing in the old horrors that lurk in the dark corners of reality. The universe was no longer a grand stage for the cosmic clash of good and evil, and God became a kind of divine tinkerer, neatly slotting all the cogs of his Newtonian machine together and leaving it to run with a steady tick. We thought we could understand the world, and so when Tony Blair returned we didn’t even see him for what he really is. We should have known better, but we thought he was just a politician.

What Tony Blair represents is the final meaninglessness of the world. We still don’t know why there is something rather than nothing. Stare too long into Tony Blair’s face and it’s hard to tell if there is something rather than nothing. What kind of a world is this if Tony Blair exists in it? For centuries philosophers would construct grand systems: an ontology and a metaphysics and an epistemology and a theory of ethics and a theory of aesthetics, all connected by one overarching principle. For Plato the eternal, for Kant the absolute, for Hegel the unfolding, for Kierkegaard the teleological. All these finely honed contraptions utterly failed to account for the whole of existence. Even Heidegger, who finally reached the understanding that there is no universal substance of Being but only individual beings, felt the need to turn this into a complete system; even the deconstructionists had to hold up their technique as a fidelity to a text. There might be nothing outside the text, but its basic unit is not one of meaning but of insufficiency in the face of the unsignifying Real. The truth is that there is no unifying principle behind anything beyond its total incoherency. Every time we think we might have a handle on how things actually work, the ghastly figure of Tony Blair emerges from its ancient swamp to remind us that this world is not a sane or a rational place.

28 Comments to “Tony Blair, dread creature of the forbidden swamp”