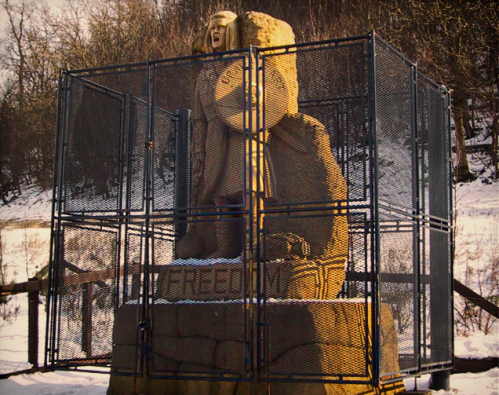 What happened to the English that turned them into the most evil people on the planet? There’s not much in their national prehistory to explain the horrors that would come later: the English are, even according to their own national mythology, a supremely wimpy tribe. When the other Germanic peoples were pushed from their homes by the constant westward pressure of the Huns they went off on grand adventures, pouring through the cracks of the rotting Roman empire, sacking the great cities of Africa, tearing Europe down and building it up again. The Anglo-Saxons, meanwhile, settled for a few damp and undefended islands on the surf-softened periphery of the continent. They could have had Byzantium; they settled for Basildon. Most historians now conclude that they didn’t even have the guts to conquer the place outright, but just slowly assimilated its existing residents into what passed for their culture.  No classic primal scene, just a miserable clump of soil in the middle of a grey sea, where the English festered, waiting to erupt. Maybe there was. Maybe they saw something on their journey, those first witlessly seasick Saxons, tactically chundering over the sides of the Britannia-bound banter boat. Some primordial nymph or siren lurking in the chilly waters of the North Sea, all blue tits and seaweed-strewn limbs and timeless malice, who emerged wreathed by storms and lighting before the bedraggled ancestors of our modern hell, saw a bunch of easy marks, and told them: accept my evil, and I will let you conquer the world. Something that struck madness and bloodlust into their hearts and those of their children even unto the hundredth generation. For centuries the promise went unfulfilled: the English had to stay cooped up in their island-prison, being periodically humiliated by the other dregs of Europe (such as the Normans, an utterly wretched gang of lost Vikings led by the walking embodiment of preening insecurity) and using their spare time to compose tediously alliterative poetry. But when it finally came to pass, it did so with raging hatred; four centuries of unrelenting revenge against the world.

When the Chinese set sail across the world, it was in pursuit of knowledge; when the Spanish did it, it was for gold and glory. The explorations of the English seem to have been propelled by a sense of fidgety restlessness, a brutally murderous boredom. For all the massacres committed by the Catholic powers in the New World, they at least left some gasping harried remnants of the old cultures. Where the English went, they tended to kill every living thing.  There are, by some accounts, only twenty-two countries that have not at some point or another been attacked by this top bunch of lads. (It’s still going on; every summer, systolic contractions in the metropole send out streams of English to wash up like an oil sick against beaches the world over.) The result is that the sickness of the Anglo-Saxons is now spread across the world: the boredom and fury of centuries of imprisonment on that rainy island in the North Atlantic; from the endless suburbs of the United States to the cultural voids of Australia there are everywhere scars on the landscape that will be forever England. And it’s nothing if not a sickness. On top of their sadistic psychopathy the English have over time absorbed every possible personality defect into their national psyche: a horrifying range of sexual neuroses, a repugnant patrician narcissism, an unbearable prudishness, a whole complex of perplexing delusional psychoses, all wrapped up in a code of socially mandated autism. The English eat terrible food, enjoy ugly saccharine literature, make art without any gleam of merit and TV shows so gut-knottingly awful it’s a wonder entire production teams don’t commit ritual suicide out of sheer embarrassment. It’s not even as if they’re unaware of it all: the English are obsessed with these signifiers of Englishness. Endless fetishes: umbrellas, cigars, rolled-up newspapers, nuclear-armed submarines. There have been antique god-kings less self-regarding than the English middle classes. These people honestly believe that if everyone else were more like them – if they liked tea and gin, if they were decent and polite as only those sitting on half a century of imperial slaughter can be – there wouldn’t be any more problems. It’s charming eccentricity, they clamour. It’s not: it’s lunacy. The English aren’t a race, they’re an infectious disease. So I entirely support Scottish aspirations for independence.

I’m not alone. An entire country is emerging into a chilly blue-and-white dawn, and the grotesque historical abomination known as the United Kingdom might finally be finished forever. The Scots can govern themselves: no more English, no more Tories, a chance to build something new and human. The problem is that it won’t really work. Not that this month’s referendum will fail – there’s enough reason to be optimistic, even factoring in the No campaign’s recent rebrand to the nauseating ‘no thanks,’ the revelation that Scottish independence forms part of a massive jihadi conspiracy to split the union, fears that bekilted diehard irredentist militias might start firing mortars into Newcastle in an attempt to return the border to Hadrian’s Wall, the looming presence of another royal baby, and so on. Most psephologists (onomatopoetic creatures; snake-tongued and disgusting) still predict a narrow victory for the unionists, but this means nothing: as any cursory reading of Hegel will show, the metaphysical force that drives world-historical transformations expresses itself through the subjective will rather than being constituted by it. It might be the case that, for all the white papers, nobody seems to be entirely sure what an independent Scotland would look like, beyond being different to things as they are now – but this isn’t a bad thing: every worthwhile political programme starts with an anguished cry of ‘not this.’ The problem is that, unless you squint at them very hard, this and not-this are entirely identical. What’s being offered is a shitty simulacrum of independence. An independent Scotland will keep our beloved ghastly peg-toothed Queen, and she will no doubt keep the vast tracts of Scotland in which she conducts her strange summer blood-rites. Scotland will likely attempt to carry on using the pahnd sterling, and continue to submit itself to the mad whims of the Bank of England. Scotland might no longer host Trident, the UK’s nuclear albatross,  but it’s likely to maintain its NATO and US presence – and may even build new bases. Scotland also hopes to remain in the European Union, with the result that, when the Transatlantic Trade and Investment Partnership comes into force, corporations will be able to sue the state for any future profits lost through any governmental policy that restricts the free market. Not that it matters: the SNP already has one of the most business-friendly platforms in Europe, and the restructuring that will inevitably follow any post-independence capital flight should quickly quash any dreams of Scottish socialism.

Across Europe once-solid borders are turning into a network of twanging rubber bands. Independence is almost in reach for the Catalans of Spain and the Flemish of Belgium. A non-binding referendum revealed that a significant majority of Venetians want to unshackle themselves from Italy; after that anything is possible. Occitanie libre, free Bavaria, a Sámi homeland, a Székely Empire, a glittering panoply of tiny strange new nations dancing in the gorgeous sunset of western civilisation. Some new states might take their names and identities from half-forgotten medieval liberties, others from hybridised immigrant cultures, others from dodgy mythology, apocalyptic cults, faint memories of visitors from beyond the stars. It won’t matter. The grand myth of our age is that the world is somehow becoming more global and more open, a smooth space lit up by the blazing trails of billions of lines of flight. In fact, there are more fences than ever – between Latin and German America, between Europe and Africa, between Israelis and Palestinians, between the rich and poor residents of the same cities and sometimes the same buildings. Capitalism doesn’t mind borders; they’re very good for isolating and exploiting people, especially those caught on the wrong side. All the capitalists ask is that their rule be entrenched on both sides of any barrier, and you can have any kind of state you like. The people ruling an independent Scotland will most likely be the exact same people ruling it today: international capitalists – in other words, the English.

Frantz Fanon wrote that the psychological tolls of imperialism could only be undone through the catharsis of violent anticolonial revolution. For all the plummy southern accents on the streets of Edinburgh, Scotland has dubious claims to being a colonised population. Educational massacre seems out of the question. What’s left? In the end it always comes back to the sea. It’s been well demonstrated that the primitive capital that set off the Industrial Revolution came from the transatlantic slave trade; from dark-age longboats to oil supertankers the sickness of the English is a sea-borne pathogen. Industrial-financial capitalism is the English madness reconfigured as a total world-system, rolling across the crested currents: illusions of representation, dispossession and death, alienation, atomisation, constant, aching, desperate boredom. If Scotland goes, it’ll be from one stacked undemocratic English-dominated system into another. The only way Scottish independence can become anything more than a sham is through a concerted effort from the whole of humanity to abolish the ocean forever.

Leave a Reply to Outside in - Involvements with reality » Blog Archive » Last Days of the UK? Cancel reply