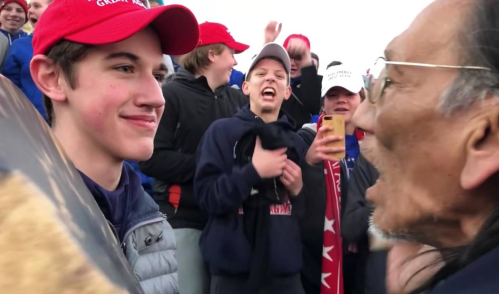 God, but it’s disturbing. The drummer ducks and weaves and chants, and the kid stands motionless, like a snake watching some quick warm scurrying thing through heat-sensitive pits. The flickering grin of a predator. The kid with his sharp nose, sharp chin, rosy cheeks, callous and clean, facing off against a man aged leathery by a thousand year history the kid will never understand. A new world is coming, and it’s an annihilation. No more memory, no more twine and leather drums: the future will be white, peach-pink white, and heartless. The kid claims otherwise. He was trying to calm the situation, he says, and he thought the best way to do it would be to stand perfectly still. And if you want it to be, that smirk could be awkwardness or embarrassment: a much older man is playing a drum loudly in his face, and he doesn’t know what to do, so he stands there and smirks at him, and then later he goes home. Maybe. But that’s not what we see: we see something disturbing, that bothers you in the marrow of your bones. It’s creepy. It’s unsettling. It makes you feel like snakes are coiling cold and smooth down the shiver of your spine. Anything is justified, anything at all, to make it go away.

The situation is this. A group of Catholic high school students from Kentucky gather at the Lincoln memorial, as part of an organised trip to an anti-abortion rally. (And there’s something deeply, unbearably wrong with a world in which all-boys fee-paying schools will bus children out to take part in an anti-abortion rally.) While there, they’re taunted and mocked by a group of Black Hebrew Israelites, present for the Indigenous Peoples March. (I’m quite fond of that group, in a weird way; their encyclopaedic Bible knowledge, their utter sincerity. Once I had a chat with a group of Black Hebrew Israelites in New York. They told me that they were the real Jews, and I was a demonic impostor. I disagreed. One of them asked me what tribe I was from, with a gotcha smirk. Tribes are patrilineal, but my mother’s a Levite, and I told him so. In their history, the tribe of Levi corresponds to modern-day Haiti. He looked me up and down for a moment. Well, he said, maybe you’ve got some of the black man in you. Take from that what you will.) At this point, Nathan Phillips, an elder from the Omaha tribe, stands between the two groups and sings the American Indian Movement song: a wordless, pan-tribal, post-signifying chant of unity, for drums and voices. (The story goes that it was first hummed by a child at the Crow Fair. It was sung at Wounded Knee.) He’s trying to defuse tensions. At first, the students chant and dance along. Then they laugh. They appear to be mocking him. And one of them stands, and stares, and does nothing.

In a video filmed after the incident, Phillips is fighting back tears. It’s heartbreaking. I heard them saying build that wall, build that wall. This is indigenous lands. We’re not supposed to have walls here, we never did. For a millennium, before anyone else came here, we never had walls. We never had a prison. We always took care of our elders, we took care of our children. We always provided for them, we taught them right from wrong. I wish I could see the energy of the young masses, the young men, put that energy into making this country really great. Helping those that are hungry. (For some reason, that very last sentence seems to go unquoted in most media reportage.) He’s a liberal, in the best sense of the word. He sees two ranks of bigots squaring off against each other, and he wants to heal the divisions. He insists that he’s standing on indigenous land, not so he can raise a discursive wall around it and mark it off as his property, but because he wants the white people and the black people to understand that they are guests, and that they should behave accordingly, with politeness. He’s a better man that I am. If I had to come up with a new categorical imperative, it would be something like this: build a world fit for someone like Nathan Phillips to live in.

We are not in that world.

Call it meta-spectacle, the spectacularisation of someone looking. Video of the incident spread almost instantly around the world. And in a mob of rich Catholic-school kids on an anti-abortion march, jeering and chanting, the focus could only narrow itself to one particular point. The kid becomes fixed, a still form in a moving picture, an object of almost universal hatred. That one. I don’t like that one. He weirds me out. It’s not a political repudiation of right-wing ideology. It’s not even revenge. It’s disgust, the mass expression of disgust, both reactive and reactionary. Thousands of people on social media, doing everything they can to find out his name, and punish him. Sample tweet: Say good-bye to life as you knew it kid because it’s about to change for good. He did it to himself. Another: You are nothing now – your future just went out the window. No college or job opportunities coming your way. You are just a piece of dust now. Not the cry of the oppressed, but the gloat of power. People so woozy on power that they don’t even notice when they don’t have it. (Snotty right-wing kids from snotty right-wing private Catholic schools often go on to snotty right-wing private Catholic colleges. You have no dominion there.) A kid grows up in the swilling resentment of some white suburb in Kentucky – and you think you can shame him out of his upbringing? Roads without pavements, deserts of empty grass leading up to peaked-roof bungalows, the latest kitchen gadgets, frog memes, and an itch – and you think you can fix it by making shitty supervillain speeches online? Of course not. Nathan Phillips wanted people to behave better. You just want to make them bleed.

A name was discovered. Inevitably, it was the wrong one. A family member described the result. Harassment and threats of physical violence… my parents, uncles, and aunts receive messages saying they are pieces of shit and won’t be able to protect [him] forever… people then started circulating articles of him regarding his dreams and goals of being a chef, find the college he plans on attending and proceed to blow them up encouraging them to rescind offer and calling him a racist POS. The response? Something along the lines of well, if it’s not him, then say who it is. You know his name. They go to the same school. Give your friend over to us, let him face our justice. How can anyone possibly think this is a reasonable demand? What on earth do these people think they’re doing? Is this social justice? Thousands of grown adults, claiming for themselves the power of unrestricted punishment over a child. Yes, non-white children – black children playing with toy guns in the park, refugee children sluiced into various inhuman state processing systems – tend to be read as adults. This is monstrous. And on the day that one single child is released from a migrant concentration camp because a mob of adults tried to destroy a private Catholic school student on social media, I’ll endorse it as a tactic forever. Until then, it’s sadism.

But it’s strange how few people can point out what’s happening right in front of them. The person they hate the most in the video is the one who isn’t laughing, or hooting, or chanting. It’s the one who stands silently, doing nothing at all.

A basilisk is a snake, twelve fingers long, and the most poisonous creature on the earth. You will know a basilisk’s lair, because the plants that surround it will have blackened and died. In one story, a hunter on horseback speared a basilisk, and the venom travelled up the spear, so that both the hunter and his horse were instantly killed. Most famously, its gaze itself is lethal; in later legends, it turns its victims to stone. In psychoanalysis, the gaze always belongs to the other; the gaze is the sensation of being looked at, reduced to an object of contemplation, of withering into the dead matter of the world. Mulvey and her followers can describe a pervasive male gaze that silently commands and restrains women; men sometimes protest that they don’t see anything, they’re just terrified objects too. They’re both right. The basilisk must exist, because the basilisk is the one that does the looking. Slithering beneath the earth, coiled around the strutwork of satellites in orbit, the basilisk looks. It is lonely to be a basilisk, the only creature that can never look another being in its living eyes. The basilisk structures all social relations, because it is infinitely apart from them. The name basilisk comes from the Greek βασιλεύς, basileus, meaning king.

Only: what are you doing right now? You are hunched over, cold-blooded and motionless, staring at a screen.

Of all the things to throw your hatred into, why this? Desperate boats have started to cross the English Channel. It’s fifty degrees in Australia. Before long, significant tracts of the earth will be uninhabitable, places that are currently home to millions of people. Turkish-backed militia are ethnically cleansing Kurdish lands in Syria. There’s a fuel shortage in Gaza; four lion cubs froze to death in Rafah City Zoo. Everything is going terribly; the world is terrible beyond belief. There is constant violence, brutal physical violence, corpses churned into the earth. So why do we feel such a particular unease at this one kid, smirking silently without words?

Because we do nothing, because we can do nothing. We stand, and stare, and do nothing at all.