DIANA
You mean they actually shot this film while they were ripping off the bank?
HERRON
Yeah, wait till you see it. I don’t know whether to edit or leave it raw.
Network (1976) 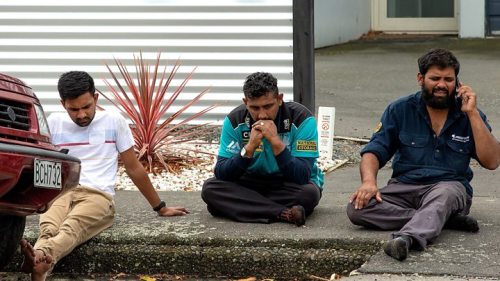 This is not the first time a killer has livestreamed their own crimes. In 2015, two journalists were murdered in Roanoke, Virginia by a man who filmed himself walking up to his victims, raising his gun, and opening fire. In April 2017, a man was shot on the street in Cleveland by a killer who uploaded the footage to Facebook. That same month, in Phuket, a man streamed himself murdering his own eleven-month-old daughter. This was always going to happen. The technologies promised to link us, to abolish distance, to turn everywhere into a potential collective here – and the result is that every square inch of the Earth is now the scene of the crime. There was a period between the abolition of public hanging and the invention of the GoPro in which death was no longer a mass spectacle. That time is over. We’re in the globe-straddling charnel-house. The conveyor belt to the abattoir runs through the palm of your hand.

But this killing is different. Today, a shooter filmed himself opening fire in two mosques in Christchurch, New Zealand. At the time of writing, forty-nine people were killed. And it wasn’t just broadcast online: it was the internet. Not a representation of real-world events within digital media, but online culture, online pathologies, online idiocy, in the form of bullets and blood. People who’d come to New Zealand as refugees, fleeing distant wars that never appeared as tracked and fungible images, were killed by a man who’d learned he should do so from a lifetime festering in the world inside the screens. Subscribe to PewDiePie, he said, and then he opened fire.

A few years ago, people like me were made vaguely aware of the fact that a Swedish man who played video games while yelling constantly in a high, squeaky, annoying voice was now a millionaire. This was added to the mounting pile of evidence that the world was incurably broken, and we mostly ignored it. Then, a few years later, as these people tend to do, he shouted a racial slur while firing pretend guns at pretend enemies. This caused a kind of unreal explosion. Politics happened in the way that politics happens online: preening and denunciations, bile and squabbling, the staking-out of increasingly extreme positions, as a joke, as a posture, in the expanding imperium between the impossible zones of the real and the fake. Suddenly this obnoxious Swede was promoting white nationalists and paying people to hold up signs that read death to all Jews. How did this happen? It’s not clear. But it should be obvious that the default online-left position, that this guy is simply a Nazi, that happened to also be a YouTube celebrity, is not enough. Something is breeding in there, in the screens, uncoiling itself in the dialectic of vitriol, and it kills.

This was, of course, before everything, a racist attack, a nativist attack, a fascist attack, and a right-wing attack. But something like the right wing doesn’t have form or existence outside of the actual modes of society. Fascism isn’t independently created out of the aether, and it doesn’t pop fully-formed into existence within someone’s malfunctioning brain. The conditions inhere everywhere. There are the peddlers of respectable racism, the ones who tepidly suggest that those people aren’t really like us, are they, and then profess to be shocked when someone distils all these just-asking-questions into bloodshed. For the most part, people’s thoughts and actions are drawn from the cultural storehouses of possible thoughts and possible deeds, and those reserves are packed with racism. There’s a material base here, in the global division of labour, in the political economy of resource extraction, in the exploitation of low-wage migrant labour, in the unprecedented disposability of the global working class. But the specific form of these reactionary politics, and the oily everywhere-ness of their spread, is unquestionably that of the internet. And the internet is not only ephemeral; it’s woven deep into the structures of social and economic life.

In his online manifesto, the Christchurch killer talks like the internet. He regurgitates Stormfront’s favourite Kipling poems. He laces his population-replacement theories with memes and copypasta. But his attitudes are coded by mass communications on a far more fundamental level. He makes clear that he killed these people to intensify the online discourse. Just like the big tech firms, he wants more people engaged in the Conversation, more intensely, more of the time. He wants people to lash out at their favourite microceleb hate-figures, to say their favourite lines, to pick their habitual fights. Naturally, it’s worked. Death is what keeps the internet spinning.

His ideology is an internet ideology. In an age of digital disintegration, the collapse of sociality and of meaningful support structures, their replacement with shifting and volatile mediated affinities, is it surprising that so many people become fixated on the idea of organic and biological racial identities? In the age of curation and cancellation, rigid structures of the aligned and excluded, the followed and the blocked, shouldn’t we expect a politics that can only see heterogeneity as threat? When everywhere is everywhere else, when blocks of meaning roll over and flatten the particularities of the world, why wouldn’t it be easy to see forty-nine living human beings as only a hollowed otherness, and decide to kill them?

The killer was born in Australia. He committed his murders in New Zealand. In his manifesto, he complains repeatedly that Muslims are gaining sovereignty over ‘European land.’ It hardly needs pointing out that both Australia and New Zealand are very far away from Europe. And New Zealand in particular is very explicitly not European land. Its colonial history is, of course, one of bloodshed and theft – but with the Treaty of Waitangi now semi-formally enshrined as the country’s founding document, there is at least some measure of recognition by the State of tino rangatiratanga, Maori dominion over the land, within the transfer of sovereignty to the Crown. Unlike many colonised populations, the Maori were formally given the rights and privileges of British subjects; they’ve had designated political representation in New Zealand’s parliament since 1867. Like Australia, New Zealand maintained restrictive border policies in the twentieth century that aimed to keep out non-white migrants – but unlike in Australia, pakeha New Zealanders could never claim to constitute the sole political subject of the State. The ethno-nationalist discourses of the killer have nothing to do with the actual structures of race and politics in New Zealand. As always, the reactionary politics that claims to want to protect distinct cultures from global homogenisation actually ends up erasing all such differences. It’s an amalgam of European nativism and American clash-of-civilisations mythology, along with personal grievance and theatrical posturing. It’s the internet.

This should be disturbing. Like many socialists of my generation and my class, my own politics were developed online, refined online, and exercised online. Even in ‘real-world’ socialist movements like Momentum or the DSA, much of the formal structure is plugged in to digital communications. Online ideological petri dishes set the agenda and define the terms of discussion, and produce monsters. This is not to draw a moral equivalence. The internetworked right commits brutal massacres; the internetworked left mostly turns pissily on itself. But it would be extremely stupid to believe that the internet has turned the right into a viral plague, and had no ill effect whatsoever on the left. These technologies impose the same conditions on everyone that becomes mediated by them – and if ideology is not material, then it’s no defence against the same swamping, polarising, homogenising, and volatilising processes that gave us the atrocity in Christchurch. We ourselves are not immune. And rather than condemning an abstractly conceived ‘hatred’ from the outside, the task is to see how far we’ve sunk into the slaughterhouse of everywhere, and make urgent plans for an escape.